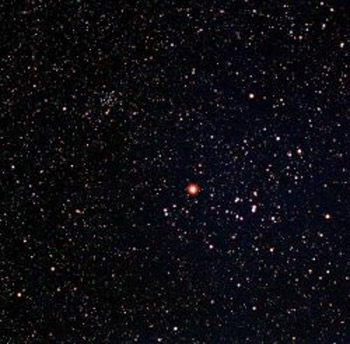 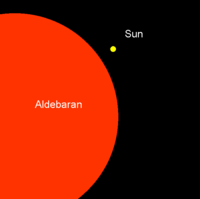 A comparison of the size of Aldebaran and the Sun. Image: Wikipedia.

Aldebaran is the brightest star in the constellation Taurus, the 13th brightest star in the sky, the most luminous star within 100 light-years of the Sun, and one of the nearest red giants. Its Arabic name, meaning "the Follower," refers to its apparent pursuit of the Pleiades across the sky. Aldebaran lies in front of the Hyades cluster but is not physically associated with it, being only half as far away. As part of a zodiacal constellation, it is close to the Sun's path, the Sun passing to the north of it around Jun 1; it is also regularly occulted by the Moon. Aldebaran is one of the easiest stars to find in the night sky. Simply follow the three stars of Orion's Belt from left to right (in the Northern Hemisphere) or right to left (in the Southern) and the first bright star you come to is Aldebaran.

Aldebaran is a low-level irregular variable that fluctuates by about 0.2 magnitude. Having evolved off the main sequence, it has expanded to have a measurable angular diameter of 0.021" (the apparent size of a nickel seen 50 km away), equivalent to a linear diameter of approximately 5.3 × 107 km, or 38 times the diameter of the Sun. If put in place of the Sun, Aldebaran would extend halfway to Mercury and span 20° of our sky.

The Pioneer 10 probe is heading roughly in the direction of Aldebaran and is projected to pass the star remotely in about 2 million years.

In the Star Trek universe, Aldebaran is home to the Aldebaran colony, the Aldebaran mud leech, the Aldebaran serpent, Aldebaran whiskey, and the Aldebaran shellmouth. (Enterprise: "Anomaly"; Original series: "Where No Man Has Gone Before"; The Next Generation: "Hide and Q", "Conspiracy", "Relics"; Deep Space 9: "Prophet Motive", "Explorers", "Distant Voices"). [This information comes from the memory-alpha.org website and is reproduced here under the terms of the GNU Free Documentation License.]