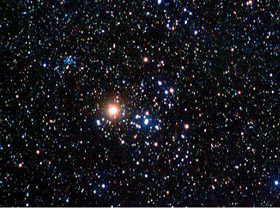 The Hyades (Melotte 25) is the nearest open cluster to the Sun, except for the Ursa Major Moving Cluster (which appears spread out as individual stars). The Hyades, also known as Melotte 25, is centered some 150 light-years away in the constellation Taurus, and contains more than 200 stars. The central group is about 10 light-years in diameter, while outlying members seem to be spread over a region at least 80 light-years across. Its age is put at 660 million years, which, taken together with its motion through space, suggests it has a common origin with the Praesepe cluster.

Although the bright red giant Aldebaran (Alpha Tauri) lies almost along the same line of sight as the Hyades, it is not a member of the cluster and lies much closer to us (about 60 light-years away). Although visible to the naked eye and therefore known prehistorically, the Hyades appears to have been first cataloged by Hodierna in 1654.

mythology of the Hyades