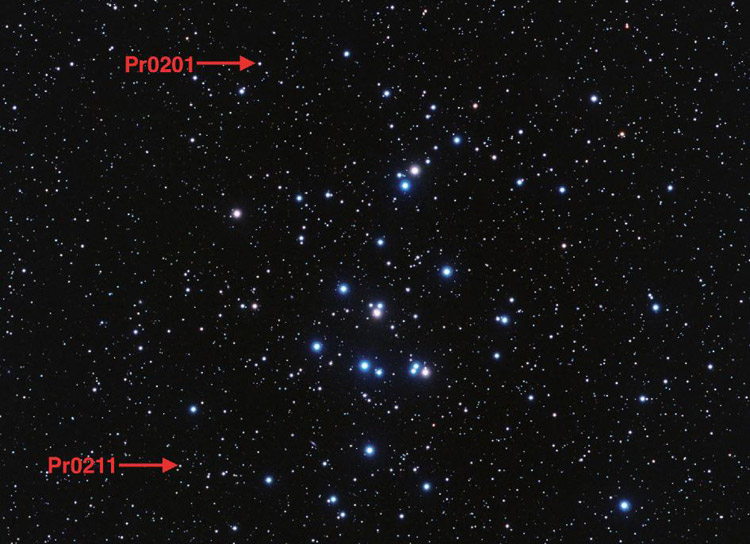 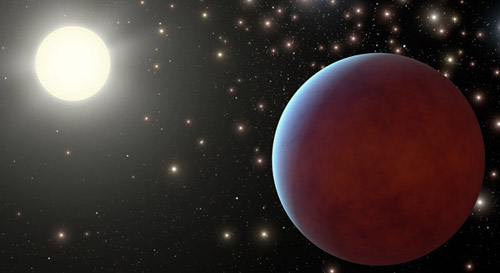 Artist's impression of a planet in a cluster.

Praesepe (M44, NGC 2632) is a large, bright, relatively nearby open cluster in the constellation Cancer, easily visible to the naked eye; also known as the Beehive Cluster, its Latin name means "manger." Ptolemy included it as one of seven "nebulae" in his Almagest and Galileo first resolved it into stars.

All told, the cluster contains about 1,000 stars in a region of sky measuring 25–30 light-years across, giving it an apparent diameter of 1.5° at its distance from us of about 577 light-years (177 pc). They include the eclipsing binary TX Cancri, the metal line star Epsilon Cancri, several Delta Scuti stars of magnitudes 7 to 8 in an early post-main-sequence state, and one peculiar blue star. Nearly a third of the stars in the cluster are similar to the Sun (spectral classes F, G, or K) and about 68% are red dwarfs. In 2012, the discovery was announced of two planets around two of the Sunlike stars in the Praesepe – the first such planets to be found in a cluster.

Interestingly, the age and the direction of proper motion of M44 are very similar to those of the Hyades, another famous naked-eye cluster. Probably these two clusters, though now separated by hundreds of light-years, have a common origin in some great diffuse gaseous nebula which existed 400 million years ago. This would also explain the similarity of the stellar populations – both clusters containing red giants (Praesepe at least five of them) and some white dwarfs.

In September 2012 the discovery was announced of two planets orbiting two separate Sunlike stars.[1] Known as Pr0201b and Pr0211b, both are "hot Jupiters" – large (gas giant) planets in small orbits around their central stars.

It's an important finding because it proves that planets can form in regions where stars are packed closely together. These are also among the youngest planets known – the cluster itself is only about half a billion years old – and the fact that they are both in small orbits sets constraints on how quickly giant planets can migrate inward from the orbits in which they originally formed.