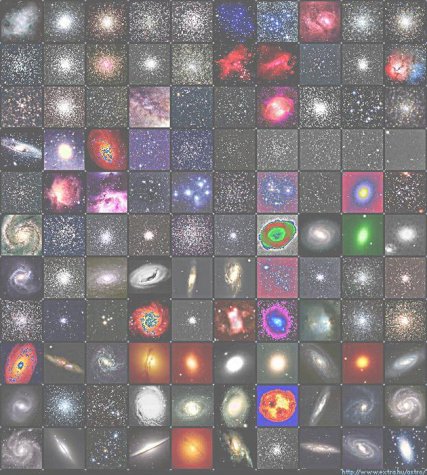 The Messier Catalogue is a list of 110 nebulous-looking celestial objects, including open clusters, globular clusters, diffuse nebulae, planetary nebulae, and galaxies, the first 103 of which were compiled by Charles Messier in the eighteenth century. Almost all of the Messier objects are among the closest to Earth in their respective classes. They remain popular targets for visual study and astrophotography by amateur astronomers and continue to be studied by professionals because of the detail that can be seen in them.

The Messier Catalogue was one of the earliest important astronomical catalogues. Messier's final list, published in 1781, includes discoveries by other observers, notably his colleague Pierre Méchain.

A similar list had been published in 1654 by Giovanni Hodierna, but was probably not known to Messier.

On star charts and in atlases, Messier objects now include the letter 'M' before each number. Among the best known examples are M1 (Crab Nebula), M31 (Andromeda Galaxy), M42 (Orion Nebula), and M45 (Pleiades). Click on the links below for more information on some of the most interesting Messier objects.