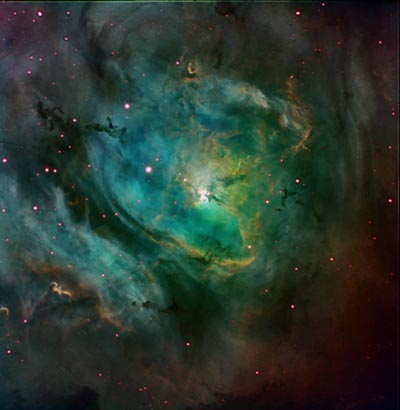 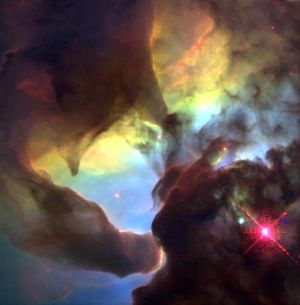 The Hourglass Nebula within the Lagoon. Image: Hubble Space Telescope.

The Lagoon Nebula (M8, NGC 6523) is a diffuse nebula in the constellation Sagittarius that is divided by a dark lane of dust. The Lagoon Nebula extends over a patch of sky 3 × 1.3 times the apparent diameter of the Moon. Within the brightest part of the Lagoon is a figure-eight feature known as the Hourglass Nebula, discovered by John Herschel and associated with a number of hot young stars, including Herschel 36 (magnitude 9.5, spectral type O7). Close to this feature is the brightest star associated with the Lagoon Nebula, 9 Sagittarii (magnitude 5.97, spectral type O5), which contributes much of the ultraviolet radiation that causes the nebula to glow.

One of the most remarkable features of the Lagoon is the presence of dark globules, each about 10,000 AU across, that are thought to be collapsing protostellar clouds. Some of the more conspicuous globules are identified in Barnard's catalogue of dark nebulae.

As so often with diffuse nebulae, a cluster of young stars that formed from the nebula's material was discovered first – in this case the open cluster NGC 6530 in the eastern half of M8. This was found by John Flamsteed in about 1680, and again seen by Jean de Cheseaux in 1746, before Guillaume Le Gentil found the nebula in 1747. When Charles Messier catalogued this object on May 23, 1764, he also primarily described the cluster, and mentioned the nebula separately as surrounding the star 9 Sagittarii; nevertheless, it is the nebula that is now generally regarded as Messier 8.