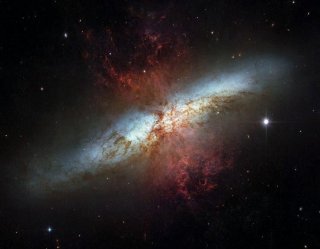 M82 (NGC 3034), also known as the Cigar Galaxy, is the prototype disk irregular galaxy and a physical partner of M81. It lies in the constellation Ursa Major and was discovered (together with M81) by Johann Bode in 1774.

The core of M82 has been spectacularly disturbed by a relatively recent encounter with M81, and is now the site of conspicuous dust lanes and a burst of star formation. M82 is the second nearest starburst galaxy, after NGC 253. Turbulent explosive gas flows underlie a powerful radio source, known as Ursa Major A or 3C 231. At infrared wavelengths, M82 is the brightest galaxy in the sky and much brighter than it is in the visible part of the spectrum. Over 100 young globular clusters have been discovered in it with the Hubble Space Telescope, their formation probably another side-effect of the close brush with M81.