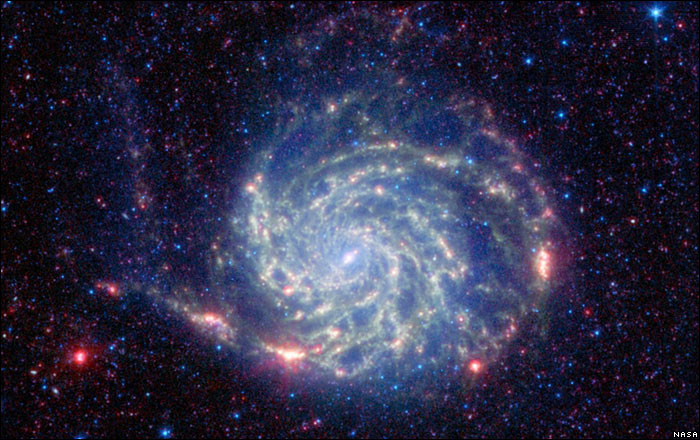 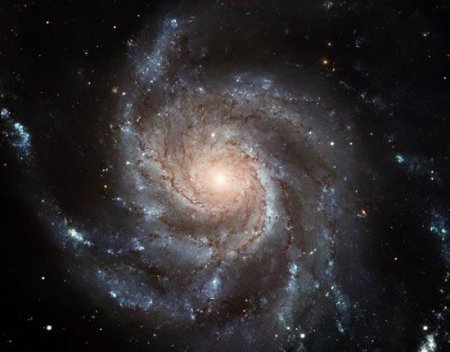 How to find M101 using the stars of the Big Dipper.

M101 (NGC 5457) is a very large, relatively nearby, face-on spiral galaxy, also known as the Pinwheel Galaxy, in the constellation Ursa Major. M101 was discovered by Pierre Méchain in 1781 and was among the first "spiral nebulae" identified by Lord Rosse. While appearing superficially symmetric on short exposures that show only the central region, it is actually remarkably asymmetric, with a core considerably displaced from the center of the disk.

Halton Arp included M101 as No. 26 in his Catalogue of Peculiar Galaxies with the description "Spiral with One Heavy Arm." It is the brightest of a group of at least nine galaxies, among which NGC 5474 (type Sc, magnitude 10.85) to the south-southeast and NGC 5585 (Sa, magnitude 11.49) to the northeast are the other most prominent. The M101 Group lies physically close to the larger M51 (NGC 5194) Group, and the two are often included together in lists as one large group.

In August 2011, astronomers spotted a Type 1a supernova in M101, the closest such supernova to be discovered since 1972. SN 2011fe, initially known as PTF 11kly, was noticed within hours of its initial brightening enabling scientists to track the progress of this kind of event in closer detail than ever before.