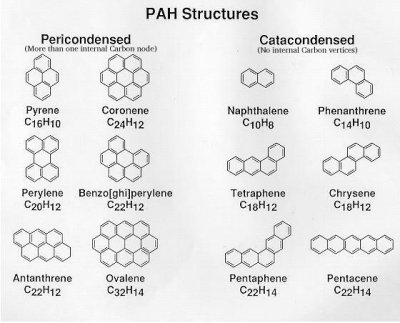 Polycyclic aromatic hydrocarbons (PAHs) are a group of hydrocarbons made up from multiple interconnected 6-carbon (benzene) rings, like pieces of chicken wire, the simplest of which is naphthalene (the chemical in mothballs). Another common, and industrially important, PAH is anthracene. PAHs are among the most stable of organic molecules. More complex PAHs may contain elements other than carbon and hydrogen, including nitrogen and sulfur.

PAHs can form in a variety of ways, as a result of both biological and non-biological processes. On Earth, they can cause pollution and cancer and are found, for example, in diesel exhaust, burned pots and pans, charred hamburgers, and cigarette smoke. Among cosmic sources of PAHs are carbonaceous chondrites, which originated in the main asteroid belt and are not associated with life as far as we know. On the other hand, David McKay and his colleagues have tried to show that the PAHs in the meteorite ALH 84001 are derived from ancient Martian bacteria, though this has been strongly disputed (see Martian "fossils" controversy).

In December 1998, scientists from the NASA Ames Research Center and the Astrophysikalisches Institute in Germany reported finding the spectroscopic signatures of PAHs in interstellar space.1 Ames researchers simulated conditions in space using extreme cold, a near-vacuum, and artificial starlight. Then they measured the spectra of large, carbon-bearing molecules in the ultraviolet and visible bands of the spectrum, and compared their results to astronomical data from Kitt Peak and other observatories. The German scientists carried out a similar study using other forms of carbon molecule. The result of the collaboration was the conclusion that previously unidentified absorption features in the spectra of the interstellar medium, known as diffuse interstellar bands, are due to PAHs in space which originated in the atmospheres of red giants. This adds to the growing impression that complex carbon chemistry is a universal phenomenon and that carbon-based life may also be common throughout space.