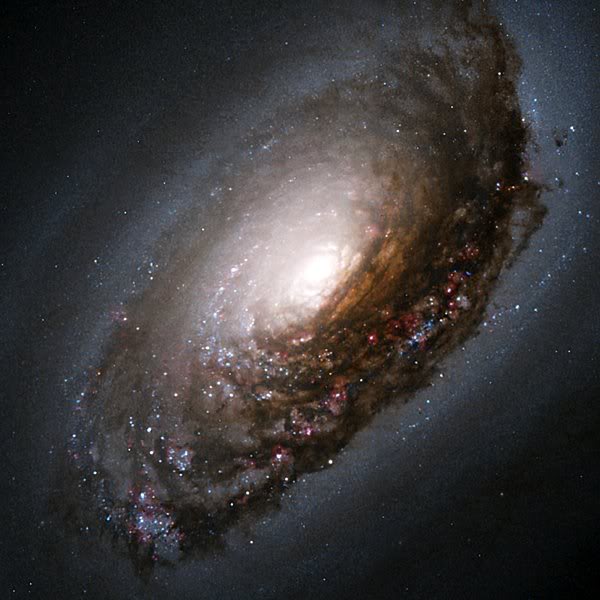 The Black Eye Galaxy (M64, NGC 4826) is a relatively nearby spiral galaxy, in the constellation Coma Berenices, with a conspicuous dark feature to one side of the bright nucleus. Discovered by Johan Bode in 1779, it is also called the Sleeping Beauty Galaxy. Although M64 can be glimpsed with good binoculars, the oval eye only starts to show in telescopes of 10- to 15-cm aperture.

M64 has two counter-rotating systems of stars and gas in its disk: an inner zone, about 3,000 light-years in radius, that rubs along the inner edge of an outer disk, which rotates in the opposite direction at about 300 km/s and extends out to at least 40,000 light-years. This rubbing may explain the vigorous burst of star formation that is currently taking place in the galaxy and is visible as blue knots embedded in the huge dust lane.

The strange disk and dust lane, according to one theory, may be the result of material from a former companion galaxy that has been accreted but has yet to settle into the orbital plane of the disk. Another suggestion is that M64 may be the prototype for a class of galaxies called ESWAG, or evolved second wave activity galaxy. According to this idea, the main spiral pattern consists of an intermediate-aged stellar population. Star formation first evolved outside, following the density gradient, manufacturing stars as long as there was enough interstellar matter available, and then slowly died out. As matter was re-released into space from the evolved stars, by way of stellar winds, supernovae, and planetary nebulae, more and more interstellar matter accumulated again, until finally there was enough to enable a new wave of star formation to begin. This second wave, the theory maintains, has now reached the region where the dark dust lane appears.