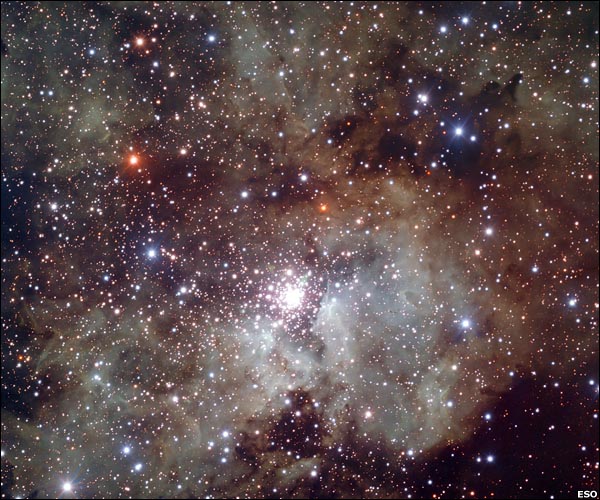 A star is a luminous body of gas sufficiently compressed by its own gravity for nuclear fusion to take place in its interior. Stars exist in a wide range of sizes (see stars, sizes), luminosities, temperatures (see stars, temperatures), and environments. However, the single most important property of a star, which largely determines its life course, appearance, and behavior, is its mass (see stars, masses). Stellar masses are thought to range from about 0.013 solar mass in the case of the lightest brown dwarfs to about 120 solar masses in the case of the most massive hypergiants.

The energy source of stars, during that phase of their life-cycle for which their radiative output remains more or less constant, is the fusion of hydrogen into helium. When the supply of hydrogen in the stellar core becomes depleted, the character and appearance of the star changes dramatically. The star swells to become a red giant or, if massive enough, a red supergiant. Finally, the star reaches a stage at which it can no longer produce energy by any kind of fusion reaction. It then effectively dies. This death may be gradual, as in the case of a Sun-like star, which ejects a planetary nebula before gradually cooling to become a white dwarf. Or, the death throe may be sudden and spectacular, as happens with very massive stars, which undergo supernova explosions at the same time as their cores collapse to form neutron stars or black holes.

Roughly half of all stars occur in binary star or multiple star systems. The neighboring stars Alpha Centauri (trinary), Sirius (binary), Procyon (binary), and 61 Cygni (binary) are all of this type. On a larger scale, stars may be aggregated into gravitationally-bound globular clusters or smaller, gravitationally-unbound open clusters, the latter consisting of stars that have formed relatively recently from the same interstellar cloud.

Many stars, known as variable stars, undergo changes in brightness. These changes result from a variety of physical processes and may be regular, semi-regular, or irregular, and may occur gradually or suddenly.

Astronomers now believe that a significant fraction of stars possess planetary systems (see exoplanets), some of which may support life. The existence of brown dwarfs – missing links between stars and planets – has also recently been confirmed.