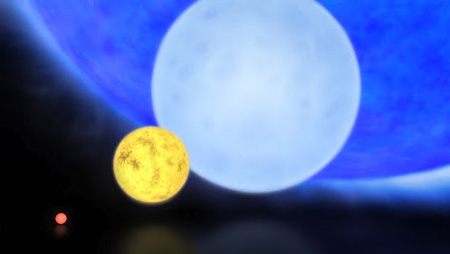 Artist's impression of different-sized stars, from a 0.1 solar-mass red dwarf through a Sun-like star and a blue dwarf of 8 solar masses a 300-solar-mass star R136a1. Image: ESO / M. Kornmesser. 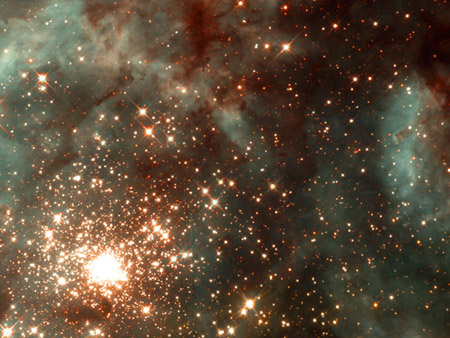 The star cluster R136 in the Tarantula Nebula (30 Doradus) in the Large Magellanic Cloud. Within have been found four stars whose masses exceed what was previously thought possible – the most massive of them weighing in at about 300 solar masses. Image credit: NASA, ESA, & F. Paresce (INAF-IASF), R. O'Connell (U. Virginia), & the HST WFC3 Science Oversight Committee.

It used to be thought that stars could range in mass from about 0.08 times that of the Sun (the lightest red dwarf) to about 150 solar masses. Below the lower limit, an object would not be able to attain a sufficiently high core temperature to trigger fusion reactions and so would exist either as a brown dwarf or simply a large planet like Jupiter. The upper limit was less certain, though it seemed there might be some stars, such as Eta Carinae, whose mass could exceed 100 solar masses and possibly reach 150 solar masses. Beyond that it was thought that a star would be too unstable to form.

Then, in 2010, four stars were discovered in the R136 star cluster within Tarantula Nebula – a huge region of active star formation in the Large Magellanic Cloud (the largest satellite galaxy of the Milky Way), more massive than any others on record. The largest of them, called R136a1, weighs in with about 300 times the mass of the Sun. At first, such stellar monsters had theorists scratching their heads. But in 2012 a paper was published1 which offered a way of explaining them. Sambaran Banerjee and colleagues at the University of Bonn ran computer simulations to follow the evolution of a cluster similar to R136. The simulation showed that in such a cluster, in which tens of thousands of stars are packed closely together, interactions between stars occasionally cause already-colossal stars in close binary pairings to collide and form a stellar behemoth.

R136, it turns out, is perfect for cooking up outlandishly massive stars due to two factors: its stellar density is high and it is young enough (one to two million years) that stellar winds haven't yet had chance to shrivel the handful of stellar super-stars it contains down to normal sizes. The more massive a star, the fiercer the stellar wind that blows from its surface and the greater its rate of mass loss. After about 1.5 million years the wind becomes particularly strong and the star enters what is known as a Wolf-Rayet phase. Further mass loss, theory suggests, can strip away half the material that a 300-solar-mass star stars out with leaving it at the extreme upper end of the "normal range".

This scenario of stellar mergings may or may not reflect what actually happens. There remains the possibility that somehow, under the right conditions, single stars manage to grab an inordinate amount of gas from the outset.


Relationship between mass and lifespan

The lifespan of a star depends crucially upon its mass – the greater the mass, the shorter the lifetime. This may seem strange, since a more massive star obviously starts out with more available fuel for nuclear fusion. However, such a star consumes its fuel at a faster rate. The more massive the star, the greater the pressure exerted on its core due to the weight of the overlying layers. Higher pressures result in higher temperatures (just as pumping a bicycle pump causes the compressed air inside to heat up). In turn, higher temperatures cause nuclear fusion reactions to take place at a more rapid rate, which increases the energy output of the core and hence the star's luminosity.

The effect is dramatic. Observations have shown that, in the case of stars with a mass more than about 3 solar masses, a star's luminosity varies as the cube of its mass. This means that a star of, say, 10 solar masses must consume its fusion fuel about 1,000 times faster than does a Sun-like star. Its lifetime is, therefore, only about one hundredth as long, or roughly 100 million years compared with the Sun's 10 billion years. For a star of 30 solar masses, the observed mass-luminosity relationship indicates that fusion fuel is "burned" 303, or 27,000, times faster than in the Sun, resulting in a lifetime of little over 10 million years.

Low mass stars, on the other hand, are energy misers, destined to spin out their meager fuel reserves over colossal periods of time. For example, Proxima Centauri, a red dwarf that is the nearest star to the Sun, has a predicted lifespan of about 16 trillion years – roughly 1,000 times the present age of the universe.