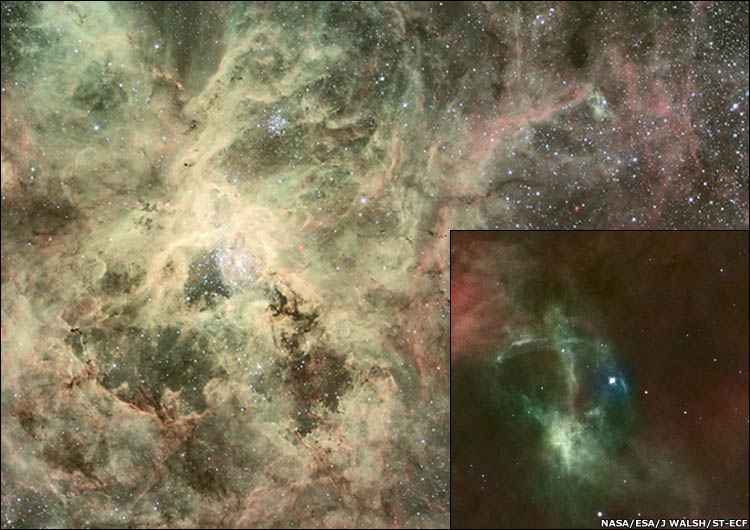 The main image shows the Tarantula Nebula from which a massive star (center of inset image) appears to have been ejected by even more massive siblings. The pictures were captured by the Wide Field and Planetary Camera 2 aboard the Hubble Space Telescope. 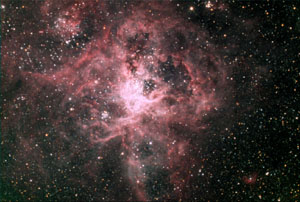 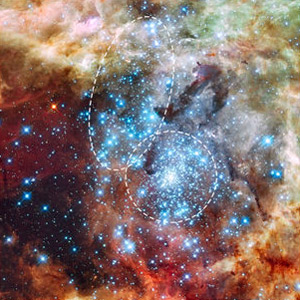 The cluster to upper left, enclosed by an oval, appears to be merging with the central, more massive cluster. Image credit: NASA, ESA, E. Sabbi (ESA/STScI).

The Tarantula Nebula (NGC 2070, 30 Doradus) is the largest and brightest emission nebula in the Large Magellanic Cloud (LMC), 170,000 light-years away, and one of the largest emission nebulae known. The Tarantula Nebula lies at the eastern end of the LMC's stellar bar. It was first cataloged as a star, 30 Doradus, then discovered to be a nebula by Nicolas Lacaille in 1751–52.

Also known as the Looped Nebula (a name that goes back to John Herschel), the Tarantula is roughly 100 times larger than the famous Orion Nebula but is illuminated in the same way: by the ultraviolet radiation from a collection of hot, young, massive stars embedded within it. The Tarantula has been an active star-forming region for about the past 25 million years. Several OB associations have been observed inside it, including the extremely luminous and compact cluster R136 near its center; it is a hotbed of Wolf-Rayet stars. Supernova 1987A occurred in an outlying part of the Tarantula – a harbinger of what lies in store for many of the Nebula's stars.


Merging clusters with the Tarantula

Astronomers have observed a large number of massive young stars just outside the Tarantula Nebula that couldn't possibly have formed where they are, but almost certainly formed within the Tarantula and were then ejected at high speed because of gravitational interactions with other massive stars in the nebula.

While investigating these runaway stars using observations with the Hubble Space Telescope, a team of astronomers noticed something unusual about the R136 cluster at the heart of the nebula – it appears to be in the process of merging with a smaller cluster. Not only are the two clusters a different age, but the smaller one is elongated as if it is being stretched out of its originally spherical shape (see photo at right). This nearby example of cluster interaction should prove useful in understanding how star clusters may have formed in the early universe.