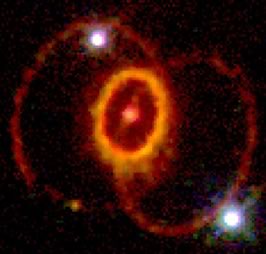 Contrary to expectations that Type II supernovae always involve red supergiants, the progenitor star of 1987A was found to be a much smaller 18-solar-mass blue supergiant, known as Sanduleak –69° 202. One explanation for the unexpectedly small size of the progenitor is connected with the LMC's lower abundance of heavy elements, notably oxygen. If Sanduleak –69° 202 had been oxygen-poor then the star's envelope would have been more transparent to radiation thus making it more likely to contract to a smaller size. The star could have been a red supergiant that experienced contraction until it became a blue supergiant of smaller size and then exploded.

A puzzling aspect of supernova 1987A is the later appearance of two overlapping rings of dust and gas, as seen in the photograph. The rings must have existed before the star exploded because they are so far out from the explosion itself. Like a bolt of lightning, the explosion simply illuminated the rings that were previously in the dark. However, the origin of the material in the rings is a subject of controversy. One possibility is that they resulted from the same kind of process that has occurred in the Red Square nebula.