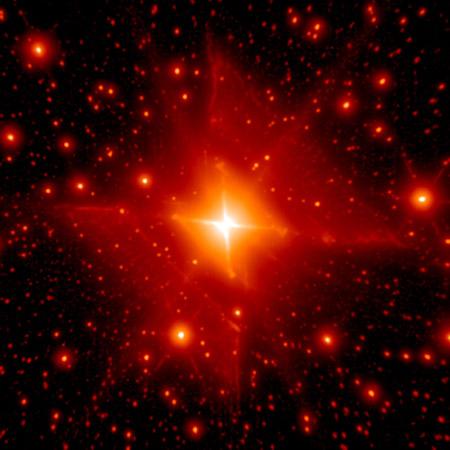 The Red Square is a nebula in the form of an almost perfect square that surrounds the hot, massive, highly evolved star MWC 922 in the constellation Serpens. It is similar in appearance but even more symmetric than the Red Rectangle. The Red Square was discovered in 2007 by astronomers Peter Tuthill of the University of Sydney in Australia and James Lloyd of Cornell University in Ithaca, New York, using the Hale Telescope at Palomar Observatory and the Keck II telescope in Hawaii.

The researchers suggest that not one but two stars may be responsible for the nebula. If one of the pair is losing material, the gravity of both stars may pull the matter into a dense disk surrounding both of them. This would force matter and radiation to escape from the system from the poles of this disk, explaining why the nebula is shaped like two cones whose tips are touching. The yellow-orange lines that appear to band the cones close to the center of the image may be the result of a particularly strong but brief outburst from the star that is shedding material. The outbursts may expel matter into space like smoke rings.

Of special interest are the faintly discernible comb-like fringes at the outer edge of each cone. Structures such as this are rarely seen in nebulae. The high degree of regularity in this case may point to the intriguing possibility that these bands are shadows cast by periodic ripples or waves on the surface of an inner disk close to the star at the heart of the system.


Solution to the mystery of supernova 1987A?

The probable three-dimensional structure of the bipolar nebula surrounding MWC 922 is shown in the animation to the right. Notice that the square appearance of the nebula is an accident of our line-of-sight. Seen from other directions in space, the nebula would look more like overlapping rings. The discoverers of the Red Square have suggested that the appearance of two rings in supernova 1987A, which has long puzzled astronomers, could be explained by a similar nebula that surrounded the progenitor star of this supernova before it exploded.