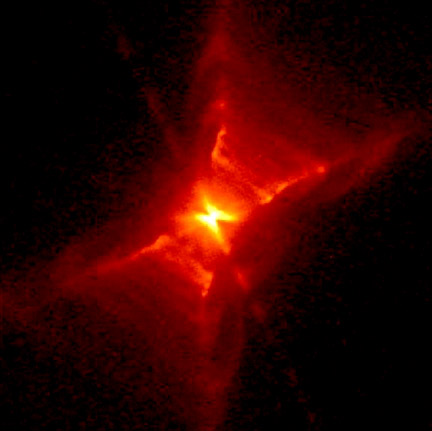 An X-shaped nebula around the star HD 44179, detected in 1975 during a survey of infrared sources; it lies about 2,300 light-years away. The emission, which is intrinsic to the nebula and not scattered or reflected light, is in a broad band in the red part of the spectrum, peaking at about 6400 Å. It is the strongest known source of this red emission, which may be a result of luminescence from hydrogenated carbon dust. At the nebula's center is a young binary star system that probably created the nebula. This type of nebula shows a bipolar outflow that carries away a significant amount of mass from the central stars. It has been speculated that the central stars create a pair of jets that precess like a spinning top. These jets might throw gas into a thick disk which we see here edge on so that it appears as a rectangle. The nebula emission is also unusual in that some of the infrared light it emits might be associated with unusual carbon-containing molecules.


PAHs in the Red Rectangle

In 2004, molecules of anthracene and pyrene were found in the Red Rectangle. A team led by Adolf Witt of the University of Toledo, Ohio, used telescopes in Chile and Arizona to examine ultraviolet light from the nebula and found the spectral signatures of these hydrocarbons. The two molecules contain 24 and 26 atoms respectively, making them about twice the size of the previous record holder, a molecular chain of 13 atoms. They are made of linked rings of carbon atoms, and belong to a class of molecules called polycyclic aromatic hydrocarbons (PAHs).

One of the stars in the binary system at the heart of the Red Rectangle is of of a type that astronomers regard as a likely source of cosmic dust. It is a post-asymptotic giant branch (post-AGB) star, an object which, having exhausted its core supply of hydrogen, is in the process of acquiring a hotter, denser core that is capable of burning helium. During this transition, which takes tens of thousands of years, the star loses an outer layer of its atmosphere. Dust may form in this cooling layer, which radiation pressure coming from the star's interior pushes out away from the star, along with a quantity of gas. In the case of the Red Rectangle some of the ejected material ends up in a disk around the smaller companion star before being ejected along bipolar jets.