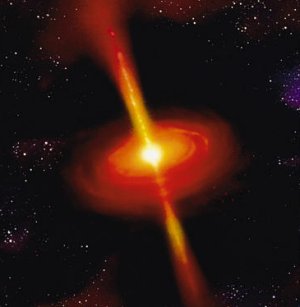 A bipolar outflow is a stream of matter in two opposing directions from a central object, usually a star. Bipolar outflows represent significant periods of mass loss in a star's life. They tend to occur during the protostar and pre-main-sequence phase and, again, during the red giant phase just before the production of a planetary nebula (for example, see Ant Nebula). It isn't certain if the bipolar flow is caused by a lack of material being ejected at other stellar latitudes or if something, such as an accretion disk, blocks the material in the equatorial regions and allows only that which is ejected at the poles to escape. It has also been suggested that magnetic fields may constrain the outflowing material. The outflows carve out cavities in the surrounding interstellar medium and result in the formation of bipolar nebulae.