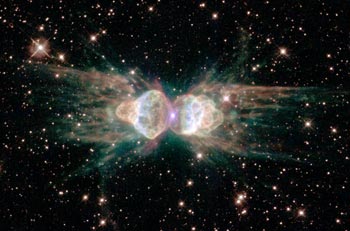 The Ant Nebula (Menzel 3) is a remarkable bipolar or "butterfly" planetary nebula in the constellation Norma, whose outflow speeds, of up to 3.5 million km/h, surpass those of any other known object of its type. Though similar in appearance to another bipolar planetary, the Butterfly Nebula (M2-9), the Ant has an outflow pattern that more closely resembles that of the bizarre, unstable star Eta Carinae.

Two main theories contend to explain the intriguing double-lobe symmetry of the ejected nebula. One is that the central star of the Ant has a close companion whose strong gravitational force shapes the gas flowing out from the primary. If this is the case, the companion must be so close, at about the distance of Earth from the Sun, that it may actually orbit inside its partner's bloated atmosphere. The other theory is that as the dying star spins, its powerful magnetic field is twisted into complex shapes like strands of spaghetti. The outflowing gas is then forced to trace out these intricate patterns, making them visible in the process.