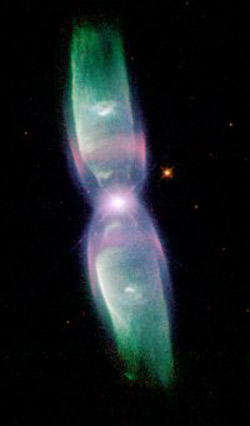 The Butterfly Nebula (M 2-9) is a planetary nebula with a dramatic bipolar structure; it lies 2,100 light-years away in the constellation Ophiuchus and was discovered by Rudolph Minkowski in 1947. Many of the unusual features of the Butterfly can be understood in terms of the central star, which is a close, mass-exchanging binary system, like a Z Andromedae star (or symbiotic nova). One of the stars is pulling matter off its partner and spinning it into a giant disk, about 10 times the diameter of Pluto's orbit. Hydrodynamic models of the type used to design jet engines show that such a disk can successfully account for the jet-exhaust-like appearance of M2-9. The high-speed wind from one of the stars rams into the surrounding disk, which serves as a nozzle. The wind is deflected in a perpendicular direction and forms the pair of jets seen in the nebula's image. This is much the same process that takes place in a jet engine: the burning and expanding gases are deflected by the engine walls through a nozzle to form long, collimated jets of hot air at high speeds.