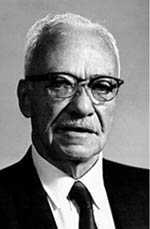 Rudolph Minkowski was a German-American astrophysicist who divided supernovae into Types I and II (1941) and, with Walter Baade, identified the first optical counterpart to an extragalactic radio source, Cygnus A.

Minkowski earned his PhD in physics at the University of Breslau, taught at the University of Hamburg (1922–1935), then joined the Mount Wilson Observatory staff. After retirement, in 1960, he continued research at the University of California at Berkeley. He studied spectra, distributions, and motions of planetary nebulae, more than doubling the number of these objects known, investigated novae and supernovae and their remnants, especially the Crab Nebula, and headed the Palomar Observatory Sky Survey, which photographed the entire northern sky in the 1950s.