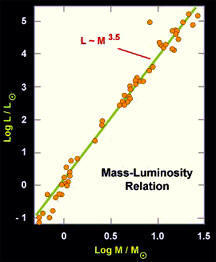 The mass-luminosity relation is a relationship between luminosity (intrinsic brightness) and mass for stars that are on the main sequence. Averaged over the whole main sequence (i.e. for stars of all masses), it has been found that L = M3.5, where both L and M are measure in solar units. This means, for example, that if the mass is doubled, the luminosity increases more than 10-fold. A more detailed examination shows that the relationship is different in different mass regimes. For stars of less than 0.43 solar mass (in which convection is the sole energy transport process), L = 0.23 M 2.3. For a mass greater than this and up to several solar masses, L varies as the fifth power of M, while for the very massive stars, L varies as M cubed. These relationships are empirical ones based largely on observations of binary stars.