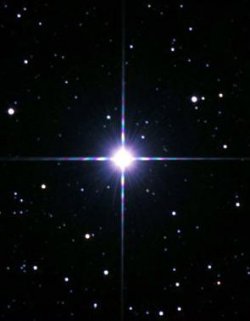 Procyon (Alpha Canis Minoris) is the brightest star in the constellation Canis Minor, the eighth brightest star in the sky, and the easternmost star of the Winter Triangle. Its Greek name means “before the dog,” since in northern latitudes it rises before Sirius, the Dog Star, and its constellation, Canis Major. Procyon is a nearby yellow-white subgiant F star, about to shut down the fusion of hydrogen to helium in its core. Its tiny companion, Procyon B, is a white dwarf, first detected visually in 1896 by John Schaeberle with the 36-in refractor at Lick Observatory, though its existence and an orbital period of 40 years had been deduced in 1861 by Arthur von Auswers based on wobbles he measured in the brighter star. Procyon B is about half the size of Earth, has a surface temperature of 8,700 K, and is separated from Procyon A by an average of only 14.9 AU – roughly the distance between Uranus and the Sun.