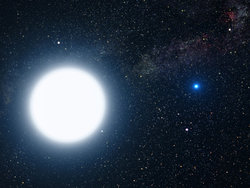 Artist's impression of Sirius A (left) and Sirius B. Credit: NASA.

Sirius (Alpha Canis Majoris) is the brightest star in the sky and also one of the nearest to the Sun. It is nicknamed the Dog Star after its constellation of Canis Major; its proper name comes from the Greek for 'searing' or 'scorching'. Sirius is one of the points in the Winter Triangle together with Betelgeuse in Orion and Procyon in the smaller dog, Canis Minor.

Sirius is a binary star system. The primary (Sirius A) is a white A star. The companion (Sirius B, or "the Pup"), orbits with a period of 49.97 yr, and was the first white dwarf to be discovered. Following Bessel's suggestion (1844) that Sirius had a dark companion to account for the star's wobbling movement, this object was optically identified by Alvan G. Clark in 1862. Spectroscopic measurements of Sirius B, by Walter S. Adams, Jr. in 1925, revealed its true nature.1 With a diameter of 12,000 km, Sirius B is roughly the same size as the Earth but has about the same mass as the Sun. It is so densely packed that an average person standing on its surface would weigh the equivalent of 23,000 tons.


Could a supernova happen in the Sirius system?

There has been some speculation that the binary system of Sirius could, in the far future, give rise to a supernova. Eventually Sirius A will evolve to become a red giant, and like all stars of this type will have only a tenuous hold on the gas in the outer parts of its bloated atmosphere. Some of this matter will be captured by the dwarf companion, which orbits the larger star at about the distance of Uranus from the Sun. Little by little, Sirius B will gain mass at its partner's expense. At present, B weighs in at 0.98 of a solar mass, making it one of the heaviest white dwarfs known. If it managed to gain another 0.4 of a solar mass by pillaging from its neighbor it would reach a critical mass called the Chandrasekhar limit (after the Indian-born American astrophysicist Subramanyan Chandrasekhar who first figured it out).

At the Chandra limit, a white dwarf can no longer support itself against its own inward tug of gravity and collapses to become a neutron star. But if the mass gain is gradual, as it is when a white dwarf in a binary system adds material at its companion's expense, and if also the dwarf is made mostly of carbon and oxygen (which Sirius B is), then something happens before the collapse has chance to take place. According to theory, when a carbon-oxygen dwarf gets within about one percent of the Chandra limit, the pressure and temperature inside it build up to the point at which the carbon and oxygen ignite in a runaway fusion reaction that tears the star apart in an explosion known as a Type Ia supernova.

If Sirius B ever goes supernova in this way, it will suddenly become about 5 billion times more luminous than the Sun. What's more, although its release of high-energy radiation wouldn't be focused in the manner of a gamma-ray burst, it would happen so close to us, in stellar terms, that the effects would be devastating. We'd be stripped of our life-protecting ozone shield as effectively as if a gamma-ray burst had gone off hundreds of light-years away.

But there's no reason to lose any sleep over this. Sirius A isn't scheduled to enter its red giant phase for another billion years or so, and even then the two stars of the Sirius system are probably too far apart for the dwarf to have a sporting chance of looting almost half-a-Sun's worth of extra matter from its partner.