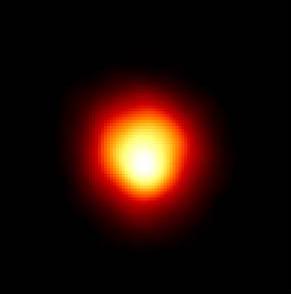 Betelgeuse imaged in ultraviolet light by the Hubble Space Telescope and subsequently enhanced by NASA. 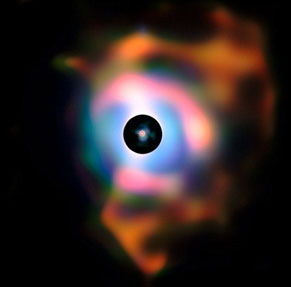 In 2011, using the VISIR instrument on ESO's Very Large Telescope, astronomers imaged a complex and bright nebula around Betelgeuse in greater detail than ever before.

This four-panel graphic illustrates how the southern region of Betelgeuse may have suddenly become fainter for several months during late 2019 and early 2020. In the first two panels, as seen in ultraviolet light with the Hubble Space Telescope, a bright, hot blob of plasma is ejected from the emergence of a huge convection cell on the star's surface. In panel three, the outflowing expelled gas rapidly expands outward. It cools to form an enormous cloud of obscuring dust grains. The final panel reveals the huge dust cloud blocking the light (as seen from Earth) from a quarter of the star's surface. Credt NASA, ESA, and E. Wheatley (STScI).

Betelgeuse (Alpha Orionis) is a red supergiant and irregular variable that is (usually) the tenth brightest star in the sky and second brightest in Orion, though it occasionally outshines Rigel (Beta Ori), with which it makes a striking color contrast. At an infrared wavelength of 2 microns, Betelgeuse is the brightest object in the sky. Its name (also written as "Betelgeuze" or "Betelgeux") is a corruption of the Arabic yad al jauza, which means the "hand of al-jauza," al-jauza being the ancient Arabs' "Central One," a mysterious woman; often pronounced "beetle-juice," though "betel-jerze" is closer to the original Arabic. It marks the upper left-hand corner of the figure of the ancient hunter.

One of the sky's two first magnitude red supergiants (the other is Antares), Betelgeuse is among the larger stars on view to the naked eye, with a measured angular size of 0.05", corresponding to a radius of 2.9 AU at 425 light-years, so that if put in place of the Sun it would extend out as far as the asteroid belt. However, uncertainty about its distance allows a possible range in size of 45 to 70% of Jupiter's orbit, and a corresponding luminosity range (including infrared) of 40,000 to 100,000 times the luminosity of the Sun.


The disk of Betelgeuse and dusty surroundings

Its disk is so large that it was the first to be reconstructed by the technique of speckle interferometry (1975) and the first to be directly imaged, by the Hubble Space Telescope (1995). The Hubble image revealed a huge atmosphere with a mysterious hot spot on the star's surface. The enormous bright spot, more than 10 times the diameter of Earth, is at least 2,000 K hotter than the rest of the star's surface. Measurements by the International Ultraviolet Explorer found a 420-day period, during which the star rings like a bell. These oscillations, thought to be caused by turbulence below the surface of the star, may cause the bright spot's position to change over time. Betelgeuse is also surrounded by a huge dusty circumstellar shell, extending up to one trillion kilometers from the star and composed of matter that has been ejected in the form of a vigorous stellar wind. The first image of the cloud was captured in 1998 using the Multiple Mirror Telescope and the technique of nulling interferometry.1.

Dust is not the only thing surrounding Betelgeuse: in 1985 it was found to have two close companions. The inner orbits every two years or so at a mean distance of about 5 AU, while the outer lies some 40 to 50 AU away.

The chances are that Betelgeuse is now fusing helium in its core. Theory suggests that its mass has now fallen to between 12 and 17 solar masses. If at the high end of this range, the core will fuse elements through neon, magnesium, sodium, and silicon all the way to iron. The star will then explode as a supernova. If it were to explode today, it would become as bright as a crescent Moon, would cast strong shadows on the ground, and would be seen easily in full daylight. If the star is near or under the lower end of the predicted mass range, then it may eventually become a rare neon-oxygen white dwarf about the size of Earth.


Will Betelgeuse threaten Earth when it explodes?

At a distance of about 640 light-years, Betelgeuse isn't exactly in our stellar backyard but it's among the nearest stars to the Sun that are doomed to go down the supernova route. Exactly when it will explode is anyone's guess. It might already have done so without us knowing, given that it takes six centuries for its light to arrive here. The best estimate scientists can give is that it will likely blow apart sometime in the next 100,000 years – a mere finger-snap of time by cosmic standards.

When the fateful day does come Betelgeuse will erupt as a so-called Type II supernova. As its outer layers head spaceward at about five percent of the speed of light, its spent core will rapidly implode to become, probably, a neutron star some 20 kilometers across. Effectively a solid ball of nuclear matter, a neutron star is so dense that a thimbleful of its contents would outweigh the entire human population.

Seen from Earth, the exploding Betelgeuse will get nearly as bright as the full Moon and be visible for two or three months in broad daylight. But, at our distance, we won't be in any danger because the vast amount of energy released by the supernova will be spread over a bubble of space with a surface area of more than a million square light-years. The flash of ultraviolet from the explosion that makes it to Earth will be weaker than the UV exposure we routinely get from the Sun. And even the X-ray burst will be no worse than that from a solar flare, causing at most a few glitches with satellite communications and the like.

Type II supernovae pose no threat to planets that are hundreds of light-years away because their deadly radiation spreads out equally in all directions and eventually becomes too thin to be of concern. From our safe distance, we or our descendants can look forward to the eventual showy demise of Betelgeuse without having to worry about the consequences.

For more, see What will happen when Betelgeuse explodes?