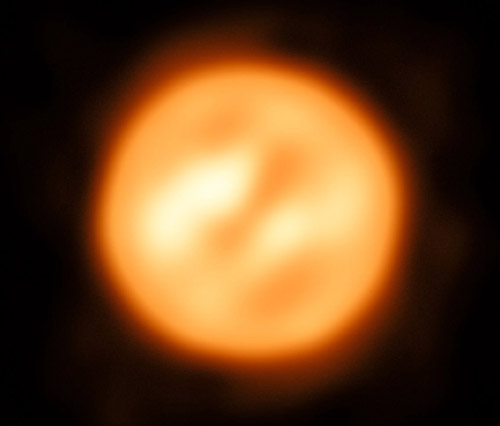 Image of Antares constructed using ESO's Very Large Telescope Interferometer. This is the most detailed image ever of this, or any other star apart from the Sun. Credit: ESO/K. Ohnaka 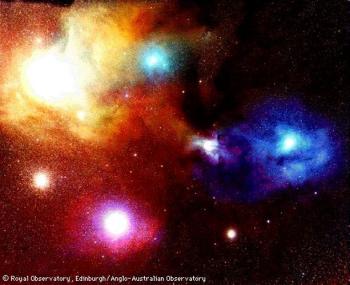 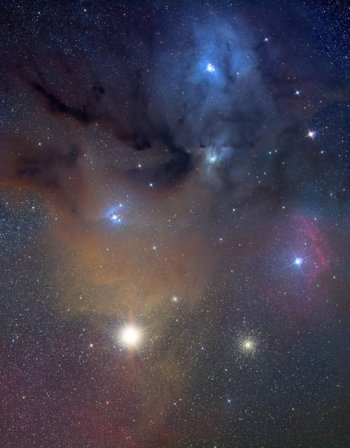 Rho Ophiuchi three-star system is to the upper right, the 22 Scorpii trinary lies just above Antares (near the center bottom). The globular cluster M4 is just to the right of Antares. [Note: this image is rotated 90 degrees anticlockwise with respect to the upper image]. Credit: Jay Ballauer and Phil Jones using a Takahashi FSQ 106 mm telescope and a SBIG STL11000 CCD camera.

Antares (Alpha Scorpii) is the brightest star in the constellation Scorpius and the 16th brightest star in the sky. It is a red supergiant and an irregular variable. Its name means "rival of Mars" (Ares and Mars being, respectively, the Greek and Roman gods of war), a reference to its similar appearance to the Red Planet. In fact, since Antares lies within a zodiacal constellation, which contains the apparent path of the Sun and planets, it is commonly mistaken for Mars. With a diameter of 800 million km, it would, if put in place of the Sun, reach about halfway to Jupiter.

In 2017, astronomers used ESO's Very Large Telescope Interferometer to construct the most detailed image ever of Antares, or indeed of any other star apart from the Sun. They also made a map of the velocities of material in the atmosphere of Antares, revealing unexpected turbulence.

A fierce stellar wind blowing from the surface of Antares has resulted in a circumstellar gas cloud, which is illuminated by the light from a hot B-type companion star that, at fifth magnitude, hides within the supergiant's bright glare (separation 3", magnitude 6.5, period 900 years). Because it contrasts with the brilliant reddish primary, Antares B may appear green. The components are a challenge to resolve in amateur scopes. Some observers report success using either a light blue or an OIII filter to subdue a portion of Antares' light.

Like many of the brightest stars in Earth's sky, Antares figures prominently in science fiction. In the Star Trek universe, it features in the romantic ballad sung by Lieutenant Uhura (Nichelle Nichols) in the original series episode "The Conscience of the King" and again hummed by her in "The Changeling." The latter performance has the unfortunate effect of persuading the alien probe known as Nomad (see self-repairing spacecraft) that she is experiencing a biological malfunction, as a result of which it wipes her memory clean. Antarean brandy is a beverage served at a dinner on board the Enterprise in 2268 (TOS episode "In Truth There is No Beauty"), while Antarean cider shows up in the Voyager episode "Shattered."

Michael McCollum's trilogy beginning with Antares Dawn follows the exploits of a human colony on the planet Alta after Antares explodes as a supernova in 2512.