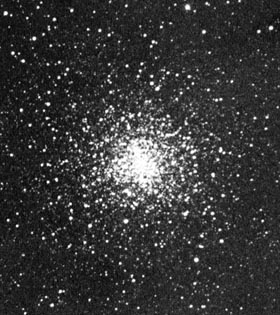 M4 (NGC 6121) is probably the nearest globular cluster to the Sun, just beating out NGC 6397 in Ara, which seems to be about 300 light-years further away. Discovered by Philippe Loys de Chéseaux in 1746, M4 lies in Scorpius, 1.3° west of Antares, and can just be made out with the naked eye under dark skies. It would be one of the most spectacular globulars on view, if it weren't obscured by dust in the galactic plane, which both dims and reddens its light. Among the most open or loose of its type, it has a remarkable feature in the form of a central bar.