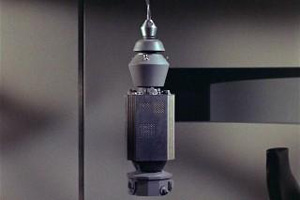 Nomad confronts Uhura in "The Changeling".

All spacecraft have a certain element of redundancy built into them, so that, for example, if a certain circuit element fails, an alternative is available that can support the same function. However, the notion of self-repair goes beyond mere redundancy and calls for an ability to self-test and actively modify aspects of the probe's systems while in flight. An early design for such a capability was the so-called Self-Testing and Repairing computer (STAR) intended for the "Grand Tour" mission of the outer planets, which subsequently devolved into Voyager.

In "The Changeling," an episode from the original Star Trek series (season 2, #37), the crew of the Enterprise encounter Nomad, an interstellar probe launched from 21st-century Earth on the first robotic mission to seek out life among the stars. Nomad had been presumed destroyed by a meteor collision but it turns out that it had in fact collided with an alien probe called Tan Ru. Somehow Nomad managed to repair itself and, in the process, merged its control programs with those of Tan Ru. The resulting combination of benign programs proved lethal and gave Nomad a new mission – to destroy all imperfect life.