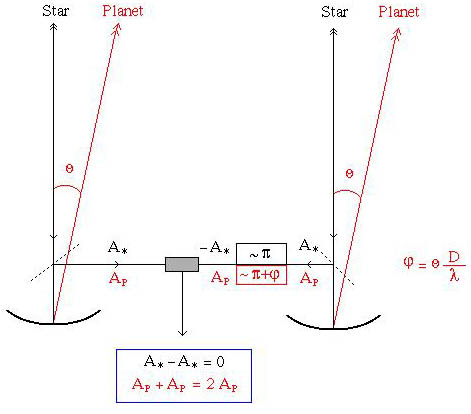 Nulling interferometry is a starlight-shading technique first proposed by Bracewell and MacPhie in 1978. It can be used to search the region immediately around a star for exoplanets and circumstellar dust clouds by suppressing the star's glare. In a two-mirror interferometer, light is collected from the star and then combined using a system of secondary optics so that the light from one mirror is exactly half a wavelength out of step with the light from the other at the pointing center of the instrument. This causes the starlight to cancel out. However, light coming from objects near the star experiences a delay which is not half a wavelength and so is not suppressed.

Nulling interferometry has been pioneered at the Center for Astronomical Adaptive Optics by Roger Angel and Neville Woolf, and was applied by Philip Hinz and colleagues, using the Astronomical Nulling Interferometer, to provide the first direct view of the dust cloud around Betelgeuse. The same technique will be used with the Large Binocular Telescope to image Jupiter-size planets close to nearby stars and, in space, in an attempt to image exoplanets as small as the Earth.