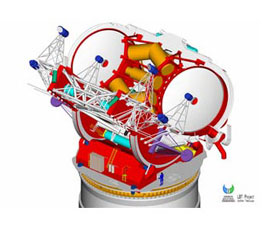 The Large Binocular Telescope (LBT) is an optical telescope employing two 8.4-meter mirrors on a common mount, with their centers 14.4 m apart, at Mount Graham International Observatory, Arizona. It saw first light in 2004 and became fully operational in 2008. The LBT is a joint venture of the Steward Observatory, Arizona, Arcetri Astrophysical Observatory, Italy, and Research Corporation, a private foundation in Tucson. The LBT's twin mirrors, equipped with adaptive optics technology, provide a light-gathering capacity equivalent to that of a single 11.8-m (39-ft) mirror and a resolving power equivalent to that of a single 23-m (75.5-ft) telescope. Among other things, the LBT is used with the technique of nulling interferometry in an effort to image exoplanets of Jupiter size or larger in orbit around nearby stars.