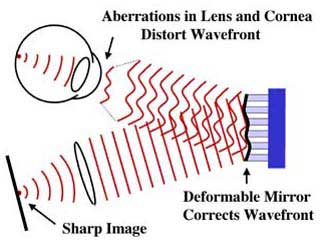 Adaptive optics is an optical system that enables rapid fluctuations in a telescope's image quality, caused by atmospheric turbulence, to be corrected in fractions of a second. These fluctuations are measured by a wavefront sensor that uses a reference star to measure the distortions that are taking place. The reference star is typically a reasonably bright star close in the sky to the object under study but may also be the object itself or a reflected laser beam that serves as an artificial reference star. The measured distortions are then removed with a phase corrector – typically a very thin mirror in the light path of the telescope that can be rapidly deformed by actuators to the equivalent shape of the wavefront, which must be subtracted to produce a sharp image (Fig 1).

Unlike active optics, adaptive optics provides real-time response and allows the image quality of ground-based instruments to rival that of telescopes operating in space. It is used in conjunction with many new telescopes including the Very Large Telescope, the Large Binocular Telescope, and the Keck Telescopes. Adaptive optics was pioneered at the Center for Astronomical Adaptive Optics and will be used extensively, in conjunction with another new technique known as nulling interferometry, in the search for exoplanets and circumstellar dust disks.

Active optics is a computer-controlled system that compensates for the distortion of a telescope's mirrors caused by gravity, and thus allows a thinner mirror and a lighter support structure to be used. It works by monitoring the image of a guide star and sending appropriate signals to actuators behind the mirror, which in turn control movable supports to correct the mirror's shape and alignment.