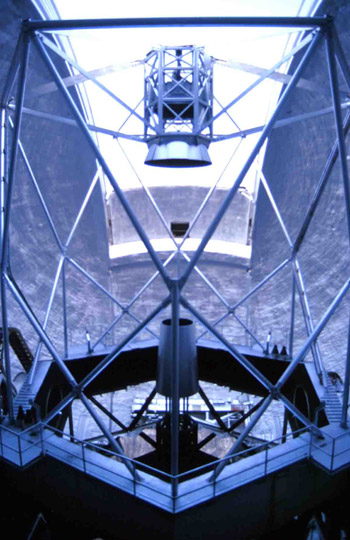 The Keck Observatory is a major optical and infrared observatory, located at an altitude of 4,200 m (13,800 ft) atop Mauna Kea in Hawaii. It is operated by the California Association for Research in Astronomy (CARA), a partnership involving the California Institute of Technology, the University of California, and NASA, and was funded by the W. M. Keck Foundation. The Observatory is home to the twin Keck Telescopes.

The Keck Telescopes are two of the largest optical and infrared telescopes currently in use. Both have primary mirrors 10 m (33 ft) in diameter, made from 36 1.8-m-wide hexagonal segments. A computer-controlled system of sensors and actuators adjusts the position of each segment relative to its neighbors, twice a second, to an accuracy of 4 nm. Each telescope has 4 times the light-gathering power of the famous 5-m Hale Telescope and 17 times that of the Hubble Space Telescope.

Keck I began scientific observations in May 1993 and Keck II in Oct 1996. Attached to Keck I is HIRES, the High Resolution &#201chelle Spectrometer. Among the instruments fitted to Keck II is MIRLIN, the Mid-InfraRed Large-well Imager.

High Resolution Échelle Spectrometer (HIRES) is a large instrument, designed by Steven Vogt and attached to the Keck I telescope, which breaks up incoming light into its component colors and measures the precise intensity of each of thousands of color channels. Operating in the 0.3–1.1 micron wavelength range, it is 10 to 100 times more sensitive than any comparable system and has been used in the detection of a number of exoplanets as part of the San Francisco State University Planet Search program.

Mid-InfraRed Large-well Imager (MIRLIN) is a sensitive infrared camera, built at the Jet Propulsion Laboratory, that has been used in conjunction with the Palomar 5-m (200-in) telescope, the NASA InfraRed Telescope Facility (IRTF), and the Keck II. Among the applications to which it is well-suited is the detection and investigation of circumstellar disks of dust around Sun-like stars. The discovery of such a disk, orbiting HR 4796A, was made by MIRLIN attached to Keck II.

The Keck Interferometer was a system in operation from 2003 to 2012 which allowed the light entering the twin Keck Telescopes to be passed through a system of adaptive optics to correct for turbulence in Earth's atmosphere, and combined through optical interferometry. The result of this technology was be to create an instrument with the resolving power of a single mirror 85 m in diameter. The Keck Interferometer was used for a range of science programs, including studies of active galactic nuclei and the formation of stars and planets.