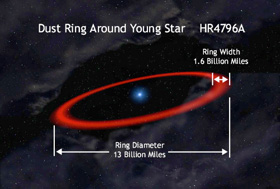 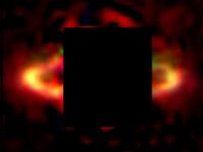 HR 4796A is an 8-million-year-old star, lying at a distance of 220 light-years (68 pc) in the constellation Centaurus, around which has been found a nearly edge-on dust disk. HR 4796A is twice as massive and nearly twice as hot as the Sun, and twenty times more luminous than the Sun.

The discovery of a dust disk around HR 4796A was announced independently, in Apr 1998, by a group led by Ray Jayawardhana from the Harvard-Smithsonian Center for Astrophysics and Charles Telesco of the University of Florida using the Cerro Tololo Observatory, and another by David Koerner of the University of Pennsylvania using the Keck (II) Telescope in conjunction with the MIRLIN instrument, which is attached to it.

HR 4796A's disk, the inner edge of which lies about 50 astronomical units (AU) from the star, is especially interesting because it is just the right age to contain planets in the final stages of accretion (see planetary systems, formation; protoplanetary disk). Indeed, it is thought that the empty region between the disk and star has probably been swept clear by a collection of newly formed planets similar to the infant Solar System. HR 4796A appears to be a missing link between disks around very young stars (see T Tauri stars) and those around more mature stars such as Vega and Beta Pictoris.

In 2008, the discovery was announced of tholins – complex organic molecules that may be important in the early development of life – in HR 4796A's circumstellar disk. This finding adds new importance to the search for infant planets that may be forming in the disk.