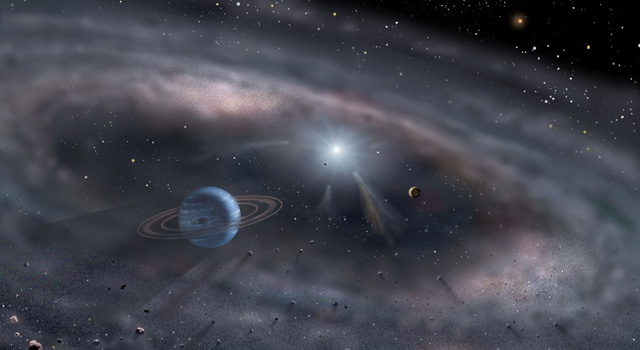 Planets form around a young star in this artist's concept. Credit: David A. Hardy /http://www.astroart.org. 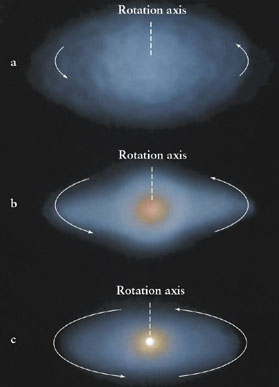 Birth of a planetary system. (a) Self-gravity collapses a slowly rotating cloud of interstellar gas and dust. (b) The cloud flattens and rotates faster around a newly formed protostar. (3) The young star begins to shine surrounded by a flattened disk out of which planets will eventually form.

The frequency with which stars are attended by planets is a key factor in the extraterrestrial life debate. This frequency, in turn, depends on the mechanism by which planets are generally formed. For about 300 years, from the middle of the 17th century to the middle of the twentieth, there were two fundamentally different, competing scenarios. The nebular hypothesis argued for the formation of planets from residual (or, in earlier versions, spin-ejected) circumstellar material and suggested that planetary systems may be common. The catastrophic hypothesis, by contrast, regarded planets as condensates from material torn out of a star by a close encounter or collision with another star, and implied that the solar system may be exceptional.1

A consensus theory of planetary formation is now to hand based on the nebular hypothesis. It envisages the gradual accretion of planets, moons, and smaller objects, from cosmic dust grains and gas particles within a primarily gaseous protoplanetary disk, which is itself a by-product of the formation of the parent star from a dense, rotating interstellar cloud. Calculations suggest that dust grains will grow by "sticky" collisions into planetesimals of the order of 10 km across (although there are still theoretical difficulties with the later stages of this process). These planetesimals then begin to interact with each other through gravity leading to a phase of runaway accretion and rapid growth.2 Confidence in this theory has been boosted by the discovery and study of numerous circumstellar disks, with masses in the range 0.01 to 0.1 solar mass, needed to produce a planetary system like that of the Sun, around young stars of widely differing spectral type. However, the theory has only been investigated in a narrow range of initial conditions and still has little predictive capability. This fact was illustrated by the unexpected discovery of massive planets in very small circular orbits (see epistellar Jovians) around Sun-like stars.

The solar system, it is thought, began as a subcondensation (see globule) in an interstellar cloud of gas and dust, from which probably hundreds of other stars also formed. To begin with, this presolar cloud was spheroidal, slowly rotating, and quite large, with a diameter of perhaps one or two light-years. As it condensed, its rotation rate increased (as a result of the law of conservation of angular momentum), causing it to become increasingly flattened. In the middle of the disk, where the density was greatest, the protosun began its final condensation. By the time the Sun had initiated nuclear fusion reactions in its core (see T Tauri stars), the pancake-shaped protoplanetary disk had started to form agglomerations at various distances from the center.

Two key factors determine what kind of planet a protoplanet will become: its mass and its distance from the central star. Planets of low mass cannot retain hydrogen and helium, the lightest and most abundant gases, especially if their temperature rises to the point at which the lightest molecules escape. When the planets were in their early accretional phase, the mass that agglomerated before the Sun began to shine helped determine how well the planet could retain its hydrogen and helium. The other crucial factor, the distance of the planet from the Sun, also influenced the escape of hydrogen and helium from the planet's gravity, because inner planets become hotter and so have more difficulty in retaining the lightest gases with a given amount of gravitational force. These considerations explain well the overall structure of the solar system. The four small, inner planets were unable to hold on to any free hydrogen and helium with which they may have started out. However, the four gas giants, lying much further out from the Sun and therefore having much lower temperatures, not only retained their light gases but, through their powerful gravitational pulls, continued to draw in more material after the Sun had turned on.

Based on these ideas, we might expect any planetary system to follow the general plan of our own, with small, dense, rocky worlds occupying orbits close to the central star and large, low-density, gassy worlds orbiting at much greater distances. However, the majority of the first batch of exoplanets to be confirmed do not conform at all to this scheme. Planets with masses even greater than that of Jupiter have been found in near-circular orbits within 2 astronomical units (and, in some cases, within 0.1 AU) of their host stars. Since it is hard to conceive how these giant worlds could have formed in situ, the consensus is emerging that they formed further out, beyond several AU, but then underwent inward orbital migration. Indeed, evidence is rapidly mounting that catastrophic events, involving planets being hurled into radically different orbits or even expelled altogether into interstellar space (see rogue planet), is a common, and perhaps universal, aspect of planet formation.3