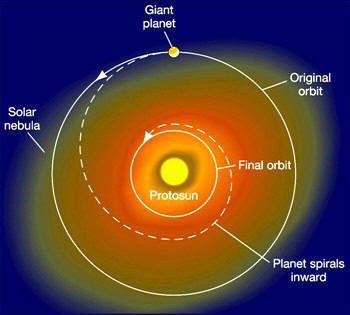 Inward orbital migration is a major reduction in the size of the orbits of some planets which may be a common collateral of the early development of planetary systems. Theories of inward orbital migration1, 2 were hastily put forward following the unexpected discovery, from 1995 onward, of massive planets in extremely small orbits about their host stars (see epistellar jovians). Since it is hard to see how such large worlds, which are presumably gas giants, could have formed in their present orbits of radii less than 2 astronomical units (AU), and in some cases less than 0.2 AU, the favored conclusion is that they formed further out and were then caused to move inward.

Several processes have been suggested to account for this drastic orbital shift, including near encounters with other large worlds, resulting in an effect like the scattering of billiard balls, and viscous drag as the new planet plows its way through the remnants of the dusty nebula from which it formed, losing energy as it goes. Both theory and observation suggest that the migration time to a small orbit for a giant planet which formed at a radius of 5 AU is less than one million years. Researchers have also sought to explain how such a world manages to avoid terminal orbital decay and a disastrous collision with its central star. One possibility is that the giant planet raises a bulge on the surface of its primary. If the star rotates faster than the planet orbits, the tidal bulge would remain ahead and tend to speed the planet along, so counteracting any tendency to spiral further inward. Alternatively, it may be that the magnetic field of the star sweeps the inner region of the nebula clear of gas and dust so that the drag on the planet abruptly stops when it reaches this open zone. While some large planets, similar to or greater than Jupiter in mass, may be affected in this way, others will form in the outskirts of their planetary systems and remain in distant orbits, as Jupiter itself has done. A number of astronomers, however, have cast doubt on whether the newly found exoplanets in tiny orbits are gas giants after all. In the absence of evidence to the contrary, it may that these worlds are, in the words of astronomer Paul Butler, "giant nickel-iron bowling balls" which actually formed in their present locations.

An intriguing question is whether, if inward orbital migration has taken place, this compromises the prospects for finding other, potentially life-bearing worlds like the Earth. It may be that an inward-bound giant planet would eject or destroy any terrestrial type neighbors that it encountered. On the other hand, it is also conceivable that other Earthlike worlds would form in its gravitational wake.