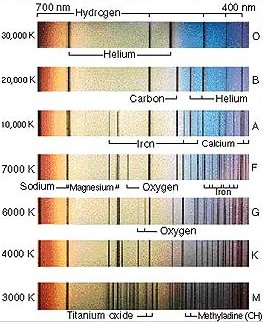 Spectral type is the category to which a star is assigned according to the characteristics of its spectrum. The classification scheme in use today has evolved from that devised at Harvard College Observatory at the end of the ninteenth century in which stars were grouped into 16 classes from A to Q. Advances in stellar astronomy led to many of these original spectral classes being dropped and others rearranged, so that the modern classification scheme (Table 1) of stellar spectra consists of seven main groups which form a temperature sequence (see stars, temperature of). From hottest to coolest they are: O, B, A, F, G, K, and M.

Each class is characterized by the appearance of certain types of spectral lines and is further subdivided into 10 sub-classes numbered from 0 to 9. The Sun, for example, is assigned the spectral class G2 in the modern Harvard classification, corresponding to a surface temperature of about 5,700&#176C. Other spectral characteristics, such as the presence of emission lines, are indicated by an additional small letter placed after the spectral type (Table 2).

In the 1890s, it was realized that stars of a particular spectral type could differ widely in luminosity. As a result, systems of luminosity classification were developed. That used today was introduced in the 1930s (Table 3).