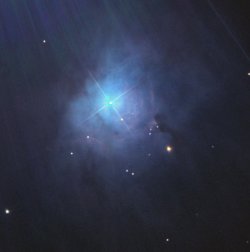 A B star is a large, luminous, blue-white star of spectral type B with a surface temperature of 10,200 to 30,000°C. The spectrum is characterized by absorption lines of neutral or singly ionized helium, with lines of atomic hydrogen evident, especially at the cooler end of the range.

Main sequence B stars, examples of which include Spica and Regulus, have a mass in the range 3 to 20 solar masses and a luminosity of 100 to 50,000 times that of the Sun. Often they are found together with O stars in OB associations since, being massive, they are short-lived and therefore do not survive long enough to move far from the place where they were formed. Their brief main sequence careers, measured in tens of millions of years, probably allows too little time for even the most primitive forms of life to develop on any worlds that circle around them (assuming that life could exist at all in such an environment).

B-type supergiants, of which Rigel is a familiar example, may be up to 25 times as massive and 250,000 times as luminous as the Sun.

A Be star is a B star that shows emission lines of hydrogen, typically with variable and complex line profiles, of which Achernar is a well-known example. The emission comes from a circumstellar disk of material that has formed due to a combination of mass loss and rapid rotation. The one-fifth of B stars that fall into the Be category spin unusually fast (even for B stars), with rotational velocities of 250 to 500 km/s. Different models propose disk radii ranging from 2 to 20 times the radius of the central star, which may itself have a radius of 3 to 12 times that of the Sun. Be stars vary in brightness and spectrum, on several different timescales. There are variations on long timescales of weeks to decades connected with the formation and dispersal of the disk, on medium timescales of days to weeks often connected with the binary motion of some of these stars, and on short timescales of 0.3 to 2 days that may due to non-radial pulsation or rotation. Some Be stars, such as Gamma Cassiopeiae, undergo occasional fadings and show deep, narrow absorption lines due to the ejection of a shell. Individual stars can change from B to Be to B-type shell star and back to B again. In certain cases, whether an object appears as a Be star or a shell star may depend on the direction from which it is being viewed. O and A stars that show the same behavior are customarily referred to as Be stars, too.

One of the big theoretical problems with Be stars has been to explain why material in the disk is held at some distance from the star instead of either being pulled closer or flying away into space. A promising new model, described in 2002, relies on the existence of a magnetic field around Be stars producing what is called a magnetically torqued disk. Magnetic field lines channel stellar wind material leaving the surface of the star down toward the equatorial plane. A disk then forms in the region where particles have enough angular velocity to counteract gravity. This model suggests that only a narrow range of types of star would form a detectable magnetically torqued disk and be seen as Be stars. Heavier stars would need an unreasonably large magnetic field while lighter stars would produce disks too small to be detected.

A Bp star is a B star whose spectrum is chemically "peculiar" (hence the "p"), usually with regard to the concentration of helium, which may be low, high, or variable (see helium star). Bp stars can be considered to be a hot subgroup of the Ap stars.