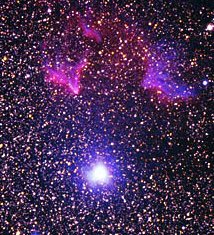 Gamma Cassiopeia and nearby IC 59 and IC 63. Image: George Greaney.

Gamma Cassiopeiae is the central star of the "W" of the constellation Cassiopeia and the first known Be star (identified by Angelo Secchi in 1866). It is among the brightest stars in the sky to have no proper Western name, though the ancient Chinese knew it as Tsih (the whip).

Gamma Cas is an eruptive variable and has given its name to a category of similar objects (see Gamma Cassiopeiae star). In 1937 Gamma Cas brightened almost to first magnitude, and it has been as faint as third. Its high rotational speed (at least 300 km/s at the equator) and high luminosity conspire to drive mass from the star into a surrounding disk that radiates the emission lines, while at the same time dimming the direct light from the star.

Gamma Cas is a member of a visual double system and is also a member of a spectroscopic binary with a period of 203.59 days, an eccentricity of 0.26, and a companion with about the same mass as the Sun. The companion might be a normal star, or it might a white dwarf or neutron star. If it were a collapsed object, this would explain why Gamma Cas is also an X-ray source: gas from the Be star accreting onto a compact companion would release gravitational energy, which would be transformed into thermal energy and then into X-rays.

The radiation from Gamma Cas is currently evaporating two nearby nebulae, IC 59 and IC 63. The leading edges of these nebula glow strongly in the red light of hydrogen reemitted after the gas has absorbed ultraviolet from the nearby luminous star. The bluish regions behind the front lines are where light is simply being scattered.

Gamma Cassiopeiae star is a fast-spinning eruptive variable with a BeIII to BeIV spectrum that, at irregular intervals, shows a series of strong, sharp absorption lines accompanied by a fading due the ejection of matter from the equatorial region of the star. The ejected material may settle into a ring (in a variable Be star) or form a shell (in a shell star), and be accompanied by a fading of up to 1.5 magnitude. Well-known examples are Gamma Cassiopeiae itself, the brightest of its type, and Pleione in the Pleiades.