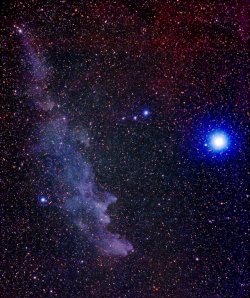 Rigel (Beta Orionis) is a blue supergiant, normally the brightest star in Orion (although variable Betelgeuse can occasionally overtake it), and the seventh brightest in the sky. Its name comes from the Arabic phrase Rijl Jauzah al Yusra'," for "the Left Leg of the Central One," from which "Betelgeuse" also derives.

Rigel is easily the most luminous star in our local part of the Milky Way Galaxy; the next nearest star that clearly outshines it is Deneb, at more than four times the distance. Because of its brilliance and the fact that it is moving through a region of nebulosity, Rigel illuminates several dust clouds in its general neighborhood. Of these, the most notable is the Witch Head Nebula.

Rigel is commonly considered to be part of the Taurus-Orion R1 Association and is sometimes classified as an outlying member of the Orion OB1 Association. It is also a multiple star system. The primary, Rigel A, is orbited as a distance of some 2,000 AU (9" angular diameter) by a pair of similar B stars, Rigel B and C, each of magnitude 7.6, which orbit one another closely at 28 AU.

Rigel has properties similar to those of the 12th-magnitude blue supergiant Sanduleak 69° 202a which was the progenitor of the Type II supernova SN 1987A. Thus, Rigel (along with its red giant constellation partner Betelgeuse) are two of the nearest Type II supernova progenitors. Such a nearby explosion would have an apparent magnitude of about -10 (roughly 4 times as bright as the Crab supernova in 1054 (about 6 times brighter than Venus and a quarter the brightness of the full moon).

Rigel's well-known appearance and name ensure that it crops up regularly in fictional interstellar yarns. It appears in E. E. "Doc" Smith's Lensman series – Rigel IV being home to the race of Rigellians. In Jack Vance's Demon Prince novels Rigel is portrayed as having 26 inhabited worlds.

In the Star Trek universe, it is mentioned on a number occasions. The planets Rigel II, IV, V, VII, and XII are the scenes of various incidents referred to in the original series, the Next Generation, and Deep Space 9.

Given the short lifespan of Rigel, measured in only millions rather than billions of years, and the intensity of its high-energy radiation, it would be extraordinary (by Earth standards) if any form of life had managed to evolve on any worlds that might happen to be in its vicinity.