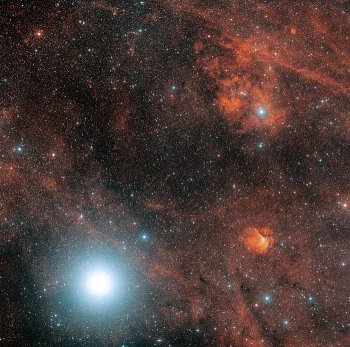 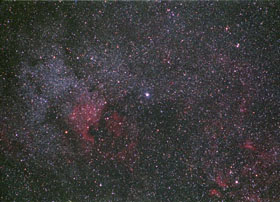 Deneb (Alpha Cygni) is the brightest star in the constellation Cygnus, the 19th brightest star in the sky, and one of the most luminous known stars in the Milky Way. Its name, meaning "tail" in Arabic, comes from its position in the Swan. It also makes the western apex of the Summer Triangle and the tip of the Northern Cross. In the same region of the sky lie a number of emission nebulae, including the North America Nebula (NGC 7000).

Deneb is an extremely luminous supergiant A star, though its exact luminosity and evolutionary state are not known because of uncertainty in its distance. Although the figure of 3,200 light-years is often quoted, parallax uncertainties mean that the true value could lie anywhere in the range 2,100 to 7,400 light-years.

Deneb is the brightest and most studied blue supergiant. It is currently losing mass, through a vigorous stellar wind, at a rate of 1.7 ± 0.4 × 10-7 solar mass per year.1 It also pulsates and is the prototype for the class of pulsating variables known as Alpha Cygni stars.

Deneb is evolving to the red supergiant stage and, at some point within the next few million years, will explode as a supernova.

An Alpha Cygni star is a type of supergiant pulsating variable star, of spectral type A or B, that undergoes non-radial pulsations with a period of 5 to 10 days and a visual amplitude of 0.1 magnitude or less, named for the prototype, Alpha Cygni (Deneb). The stellar oscillations may be complex, consisting of multiple pulsation frequencies as well as the fundamental one, so that the brightness changes appear irregular. The changes can only be small, however; otherwise, the star would become unstable and blow apart.

Like many other prominent stars in the night sky, Deneb has been used as a location in a number of science fiction stories. It is the location of an Earth colony in the Babylon 5 universe and is mentioned in several episodes of Star Trek. The implication is that Deneb has a planetary system, although no planets have yet been detected around this star. In the Star Trek original series (TOS) episode "Where No Man Has Gone Before", Captain Kirk and Gary Mitchell refer to a night that Mitchell spent on Deneb IV. In TOS: "I, Mudd", Harry Mudd and Mr. Spock note that capital punishment is the penalty for fraud on Deneb V. In TOS: "The Trouble With Tribbles", Korax describes Captain Kirk as being a "Denebian slime devil". Deneb IV is also mentioned in the Star Trek: The Next Generation episode "Encounter at Farpoint".