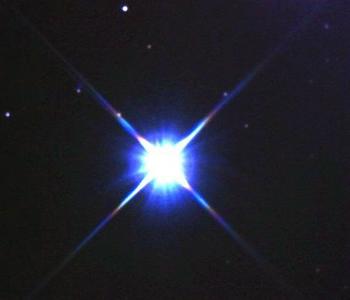 Spica (Alpha Virginis) is the brightest star in the constellation Virgo. Prominent in the southeast in northern spring evenings, it can easily be found by following the curve of the Big Dipper's handle through Arcturus and then down. Spica lies about 10° south of the celestial equator and practically on the ecliptic, so that it is regularly occulted by the Moon. The Sun passes Spica in the fall, rendering the star a harvest symbol that is reflected in its name, from the Latin meaning "ear of wheat."

Spica actually consists of two B stars, so close together that they orbit each other with a period of only 4.014 days. The brighter component, with a mass of 10.9 solar masses, is a Beta Cephei star that seems to be near the point of exhausting the supply of hydrogen in its core. Both components are blue, with temperatures of approximately 20,000 K. Strong X-ray emission has been recorded, at least some of which seems to be produced when the winds that flow from the brilliant pair violently collide together. Additional evidence suggests that Spica may in fact be a multiple star system, containing two other fainter components.