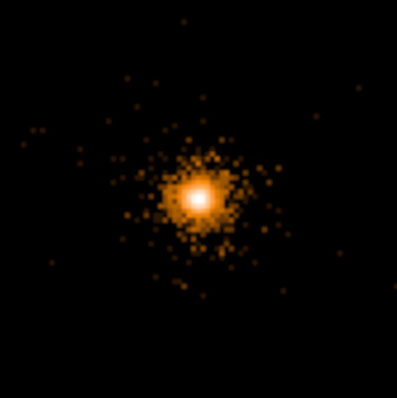 Alfirk (Beta Cephei) is the second brightest star in the constellation Cepheus and the prototype Beta Cephei star. Its Arabic name (also spelled "Alphirk") may refer to "the two stars" (the other being Alderamin) or may come from a phrase meaning "flock of sheep."

A giant B star, Alfirk's chief period is 4.57 hours, during which it varies from magnitude 3.16 to 3.27 and back. Like all Beta Cephei stars, however, Alfirk pulsates with many periods at once, smaller changes taking place with a variety of other periods between four and five hours, in addition to 6- and 12-day rotational modulations. It is also a Be star that sheds matter and has a magnetic field about 100 times stronger than Earth's. Beta Cephei has a hot corona that radiates about 2,000 times more X-ray power than the Sun – activity thought to be related to the star's advanced stage of evolution.

Two smaller, dimmer A stars accompany it: the inner, about 45 AU away with an orbital period of some 90 years; the outer, easily seen in a small telescope, at least 2,400 AU away with a period of at least 30,000 years.

A Beta Cephei star is a pulsating variable, of spectral type O9 to B3, with a short period (3 to 6 hr) and small magnitude range of 0.1 to 0.3 (less than those of Cepheid variables). Beta Cephei stars are confined to a narrow band of the Hertzsprung-Russell diagram near the end of core hydrogen-burning stars of roughly 10 to 20 solar masses. Most such stars expand and contract radially, but a few have odd quivering motions with complex and multiple periods that give them more random-looking light curves. The prototype is Alfirk (Beta Cephei), although members of the group are also called Beta Canis Majoris stars, after another bright example, also known by its proper name Mirzam.