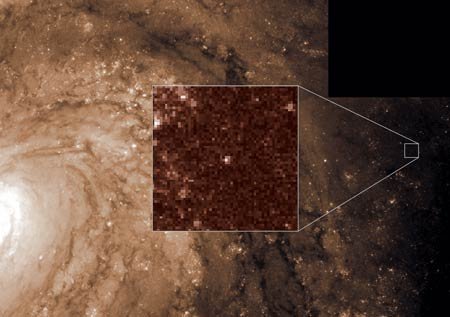 Fig 1. Hubble Space Telescope image of the galaxy M100 showing a number of Cepheid variables. The Cepheid star in the center of the box is located in a star-forming region of the spiral arm of the galaxy. 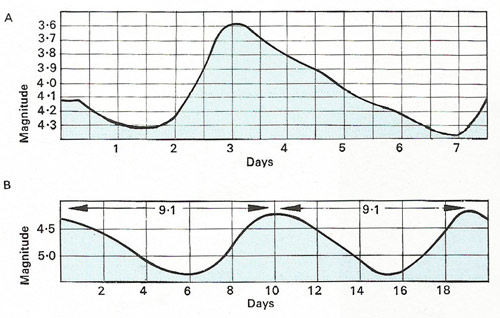 Fig 2. Cepheid variables are notable for their regularity. Delta Cephei itself has a period of 5.3 days [A]; in comparison the light curve of the southern Cepheid variable Kappa Pavonis has a period of 9.1 days [B]. The shapes of the curves are not identical. Since Kappa Pavonis has the longer period, it is the more luminous. Other famous Cepheids are Zeta Geminorum (10.2 days) and Eta Aquilae (7.17 days).

A Cepheid variable is a yellow giant or supergiant pulsating variable whose period of pulsation is directly related to its luminosity: the longer the period, the greater the mean intrinsic brightness. This strict period-luminosity relationship makes Cepheids important cosmic distance indicators, since, by measuring a Cepheid's period and comparing the intrinsic brightness, which this yields, with the apparent brightness, the star's distance can be worked out. In addition, since Cepheids are so bright that they can be seen in other galaxies, they help establish a distance scale well beyond the Milky Way (see cosmic distance ladder).

Cepheids fall into two distinct categories: Type I and Type II (see below).

Although the luminosities of all Cepheids are proportional to their periods, there is a different relationship for each type. The light curves of Cepheid variables have a characteristic shark-fin shape, with a rapid rise to maximum, a brief stay at peak brightness, and a smooth, slow decline to minimum (see Fig 2).

Cepheids have left the main sequence and lie on the instability strip of the Hertzsprung-Russell diagram. Over 1,000 have been cataloged, of which the first to be found was Eta Aquilae and the best known is Polaris, the North Star.

Type I Cepheids , also known as a classical Cepheids or Delta Cephei stars, after the prototype, Delta Cephei, are massive (5 to 20 solar masses), extreme Population I objects of high luminosity that undergo very regular pulsation. The periods of Type I Cepheids range from 1 to 135 days but are typically 5 to 10 days. Accompanying the pulsations are changes in brightness, with amplitudes of 0.1 to 2 magnitudes, and in spectral type, typically from F at maximum to G or K at minimum. Type I Cepheids are more metal rich and about 4 times more luminous than Type II Cepheids. They are found in the spiral arms of galaxies.

Type I Cepheids occupy a region of the Hertzspung-Russell diagram known as the instability strip; having started life as hydrogen-burning B stars they are now in a post-main-sequence phase marked by instability to radial pulsation. A star may pass through such a phase several times after leaving the main sequence: once during shell hydrogen burning, twice more during core helium burning, and twice again during shell helium burning.

A bump Cepheid is a Type I Cepheid that has a bump in its light curve. The light curves of Type I Cepheids are asymmetrical, with a rapid rise to maximum light and a slower fall. The form of the light curve changes with period in a systematic way known as the Hertzsprung progression. A bump appears on the descending branch of the light curve of stars with periods of about a week and is found at earlier phases in stars of successively longer periods so that the bump is near maximum light in stars of 10-day period, which may show a double maximum. The bump falls on the rising branch in stars of longer period. Stars of the shortest or longest periods have smooth light curves. The amplitude of the pulsation increases slowly with period up to about 10 days, where there is a drop in amplitude; it then increases more rapidly to longer periods. The bumps may represent an echo of the surface pulsation from the deep interior; an alternative explanation is that they result from a resonance when the second overtone period is about one-half of the fundamental period.

Type II Cepheids, also known as W Virginis stars, are Population II objects found primarily in globular clusters, galactic halos, and elliptical galaxies. They may have periods ranging from 1 to 35 days, although the period is 10 to 30 days.. Although W Vir stars show a period-luminosity relation, which is characteristic of Cepheids, the relation is different than that of Type I Cepheids. Type II Cepheids are typically 1.5 magnitudes fainter than their Type I cousins and have a mass of less than 1 solar mass, so that they are clearly at a different evolutionary stage. They also have a distinctive light curve with a variation of 0.3 to 1.2 magnitude and a bump on the decline side. Two subgroups are recognized: long-period, exemplified by W Virginis itself, with periods of greater than 8 days, and short-period, exemplified by BL Herculis, with periods of less than 8 days.

A beat Cepheid is a Cepheid variable in which two or more nearly equal periods of variability pass into and out of phase with each other, producing a 'beat. Also known as double-mode Cepheids, such stars account for nearly half of all Cepheids with periods of 2 to 4 days. Beat periods are typically about 2 hours.