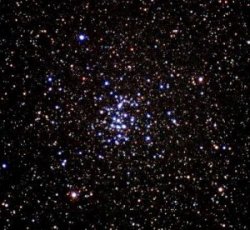 Population I stars in the open cluster M44.

Population I stars and other objects, such as star clusters, are objects that tend to be found in, or near to, the plane of a spiral galaxy and follow roughly circular orbits around the center. They are younger than Population II objects, have a relatively high heavy element content, and have probably been formed continuously throughout the lifetime of the disk.

Extreme Population I objects are found especially in spiral arms and consist of young objects, such as T Tauri stars, O stars and B stars with associated HII regions, and stars newly arrived on the zero-age main sequence. Such objects are characterized by high metallicity and occur near sites of recent star formation. It is the brilliant light – in particular, the intense ultraviolet radiation – from extreme Population I stars that causes the spiral arms to glow to brightly. Older Population I objects include stars like the Sun.

All Population I stars are relatively rich in elements heavier than hydrogen and helium since they formed from clouds of gas and dust which contained the products of nucleosynthesis from previous generations of stars. The presence of heavy elements in protoplanetary disks is believed to be a key factor in the formation of planets, so that only Population I objects are expected to harbor planetary systems, and possibly life, similar to our own.