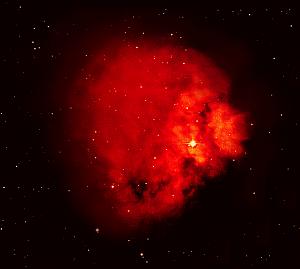 Sh2-242: a small HII region on the edge of a molecular cloud that lies just southeast of the supernova remnant Simeis 147 in the constellation of Taurus.

An HII region is a volume of space where the hydrogen in the interstellar medium is in an ionized rather than a neutral state. Generally, HII regions occur where hot, blue OB stars are pouring large amounts of ultraviolet radiation into the surrounding cloud from which they were recently formed. Such stars can ionize all the hydrogen (and other atoms) for dozens or even hundreds of light-years in every direction. The ultraviolet light strips electrons away from hydrogen atoms by the process known as photoionization. Then as the electrons recombine with protons (hydrogen nuclei) they emit a characteristic series of emission lines as they cascade down through the energy levels of the atom. The visible radiation in these lines imparts to HII regions their beautiful colored glows.

HII regions have typical kinetic temperatures of 10,000 to 20,000 K, and a density of about 10 atoms/cm3. The most famous of them is the Orion Nebula.