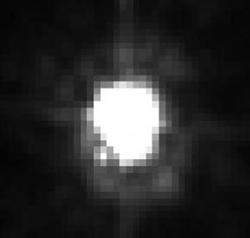 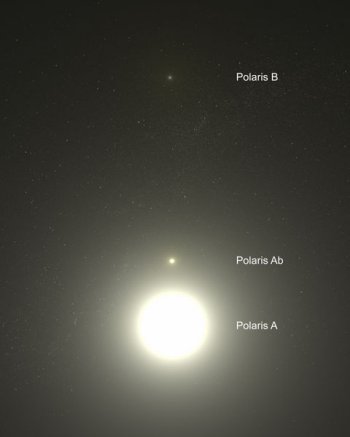 Artwork of the Polaris trinary.

Polaris (Alpha Ursae Minoris), also known as the North Star or Pole Star, is the brightest star in Ursa Minor. It is slightly off the pole and travels each day in a tiny circle around it about 1.5° across. Because of a 26,000-year wobble in Earth's axis, the pole of the sky is slowly moving closer to Polaris, but then, around the year 2100, will start to pull away. Thousands of years from now, Polaris will be well off the pole, other stars someday taking its place (see pole stars).

Polaris is an evolved yellow supergiant F star, passing through a phase of instability in which it pulsates over a period of about 4 days, varying almost imperceptibly as the nearest and brightest Cepheid variable in the sky. Polaris is particularly interesting as the pulsations have nearly, but not quite, ceased. Just as a violin string has a fundamental tone that gives its pitch, it also vibrates in higher-frequency overtones. Comparison with other Cepheids shows that Polaris is pulsating not with its natural fundamental period, but in its first overtone. The star may be in the process of evolving into its fundamental period of 5.7 days to become a more normal Cepheid with a greater variation.

Polaris is actually a triple star system, or trinary. The more distant of the two companion stars is an F3 main sequence star which orbits with a period of thousands of years. The closer companion, which is about 2000 times fainter than Polaris, moves around at a distance of only about 5.1 billion km (3.2 billion mi) – roughly the distance of Pluto from the Sun. It was only in 2006 that astronomers announced that, using the Hubble Space Telescope, they had been able to resolve Polaris and its dim, nearby companion – a feat equivalent to seeing a coin from about 30 kilometers away. Further observations will enable the movement of the inner star to be measured, which in turn will reveal Polaris's mass.


Music of the spheres

In February 2008, Polaris became the target of the first song ever beamed directly into space. The song was "Across the Universe" by the Beatles. It was transmitted toward Polaris by NASA's Deep Space Network on the 40th anniversary of its first recording.