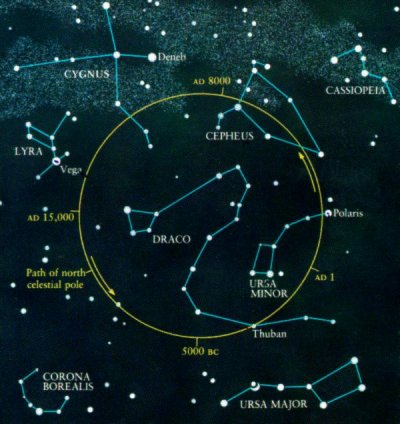 Although Polaris, the north star, sits within half a degree of the north celestial pole, this was not always so. Earth's rotational axis undergoes a slow, 26,000-year wobble, known as precession, around the perpendicular to its orbit around the Sun, as a result of which the position of the sky's rotational pole, around which all the stars seem to go, constantly changes. Around the time of the Greek poet Homer, Kochab was the north pole star. Among the best ever, however, was Thuban, which was almost exactly at the pole in 2700 BC. It remained better than Kochab up to around 1900 BC, and was therefore the pole star during the time of the ancient Egyptians. Other bright stars, including Alderamin, have served as pole star, and will again in the remote future. The star currently closest to the south celestial pole is Sigma Octantis, which is barely visible to the naked eye and lies 1° 3' from the pole (though it was as close as 45' just a century ago).

A circumpolar star is a star that never sets as seen from a given latitude. At either of Earth's poles all stars are circumpolar, whereas at the equator none are.