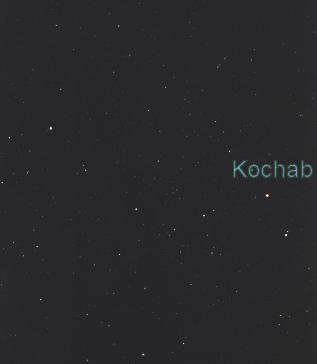 Kochab (Beta Ursae Minoris) is the second brightest star in the constellation Ursa Minor, marking the top and front of the Little Dipper. Its Arabic name (also given as Kocab) is obscure and may simply mean 'star.' Together with the other bowl star, Pherkad (Gamma UMi), they make the Guardians of the Pole. Polaris is only a temporary pole star that will get better into the next century and then will begin to shift away. About the year 1100 BC, the pole made a reasonably close pass to Kochab, and there are old references to this star being called 'Polaris.'

Kochab has exhausted its core supply of hydrogen and is an evolving orange giant star probably at the stage of helium-burning. It is also classified as a mild barium star.