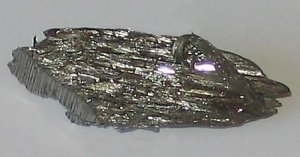 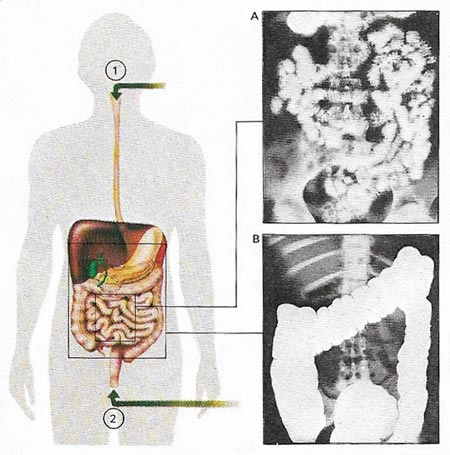 Fig 2. Barium sulfate is used in radiology to provide contrast in X-ray photography. Internal tissues such as the digestive system and kidneys allow the passage of X-rays to varying extents. But when filled with a substance that blocks the X-rays, they can be made opaque and show up as white. The barium meal, a harmless paste that passes through and out of the intestines unchanged, can be swallowed (1) or injected into the rectum (2). When swallowed, it outlines in turn the esophagus, the stomach, and the small intestine (A). Ulcers, tumors, and alterations of function can be seen. Similarly, the colon or large bowel can be photographed (B). 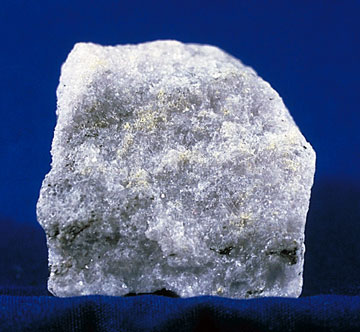 Barium (Ba) is a soft, silvery-white metallic element that readily tarnishes in air (Fig 1). It is one of the alkaline earth metals. It was discovered by Humphry Davy in 1808 and occurs chiefly as barite (barium sulfate, BaSO4) and as witherite (barium carbonate, BaCO3).

The compounds of barium resemble those of calcium but are poisonous. They are used in the manufacture of paints, glass, rodent poison, and fireworks, and as drying agents. Barium sulfate is swallowed to allow X-ray examination of the stomach and intestines because barium atoms are opaque to X-rays; this is called a "barium meal" (Fig 2).The most common isotope is barium-138 (71.66%).

Barite, which is also called baryte, barytes, and heavy spar, is the chief ore of barium (Fig 3). It consists of barium sulfate (BaSO4) in the form of colorless or white (when pure), brown, yellow, or gray orthorhombic crystals with perfect cleavage in three dimensions. Barite is a very dense mineral (its name comes from the Greek baros meaning "heavy") often found in association with lead or zinc ores. Because of its high density it is used to make muds for lubricating and cooling oil-well drilling equipment. It is also used in the chemical industry for paper-making, rubber manufacture, and high-quality paints. Hardness 3–3.5, relative density 4.5.

A barium star is a giant star of spectral type G2 to K4 whose spectrum contains unusually strong absorption lines of barium (notably the 4554 Å line) and of some other heavy elements such as strontium. Also known as heavy-metal stars or Ba II stars, barium stars are thought to have been contaminated with by-products of nuclear fusion by companions that have already far evolved and are now white dwarfs. An example is Altarf (Beta Cancri).