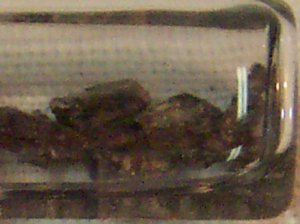 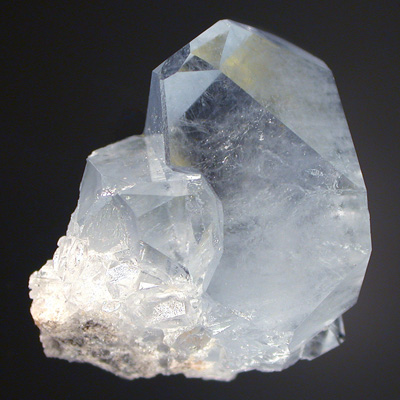 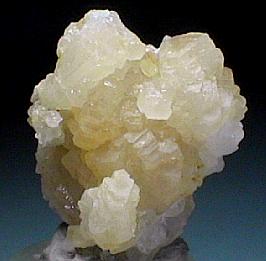 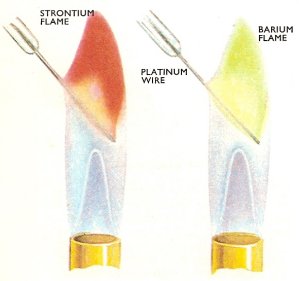 Strontium is an alkaline earth metal, found in group II, period 5 of the periodic table. Also in this group are calcium and barium, both of which are similar to strontium chemically. Strontium burns in air and reacts with water. It is used to make special glass for televisions, but is best known for the brilliant crimson color its salts impart to fireworks and flares.

Because strontium is chemically very like calcium, it is easily assimilated by the body, ending up in our bones. Radioactive strontium-90 (half-life 28 years), which is produced in nuclear explosions and released during nuclear plant accidents, is particularly dangerous because it can be absorbed into the bones of growing children.

Celestine, or celestite, is a mineral, strontium sulfate (SrSO4), with distinctive pale blue or white, glassy, orthorhombic crystals, sometimes occurring in fibrous masses. They can be confused with barite, the mineral form of barium sulfate. Celestine is found chiefly in sedimentary rock and also as gangue material (i.e. commercially worthless) in ore veins. There are deposits in Britain, Sicily, and the USA. It is an important source of strontium and its compounds.

Strontianite is a carbonate mineral, strontium carbonate (SrCO3). It has orthorhombic system, hexagonal twinned crystals, and it also occurs as massive or columnar aggregates. It can be pale green, white, gray, yellow, or brown. Strontianite crystals are sometimes confused with the mineral form of barium carbonate, witherite. Strontianite is found in low-temperature hydrothermal veins, often in limestone. Hardness 3.5–4; relative density 3.7.

Strontium hydroxide is made by treating the carbonate with superheated steam. The hydroxide can be used in the refining of sugar. Sugar dissolves in water and therefore water cannot be used to wash it free of impurities. With strontium hydroxide, the sugar forms a white insoluble compound called strontium saccharate. The strontium saccharate is washed free of impurities. The sugar is reformed by blowing carbon dioxide through the saccharate. The sugar redissolves and solid particles of strontium carbonate form. They are then removed from the purified sugar. This method is not universal and in some cases calcium hydroxide is used instead.

Because of its high oxygen content (which helps in burning) and the red color of the flame, strontium peroxide is sometimes used in the burning mixture for tracer bullets. Strontium nitrate, though, is more popular for ordinary fireworks.