Fig 1. Magmatic ore bodies may result from several different causes: settling of denser minerals or elements to the lower part of a magma chamber during cooling (A); injection of late-crystallizing magma components along fissures (B); contact metamorphism in which minerals of the wall rocks are replaced by other minerals derived from the magma (C); and hydrothermal deposits filling the fissures with minerals from the magma and transported by hot watery solutions (D), as in the copper deposits of Butte, Montana. 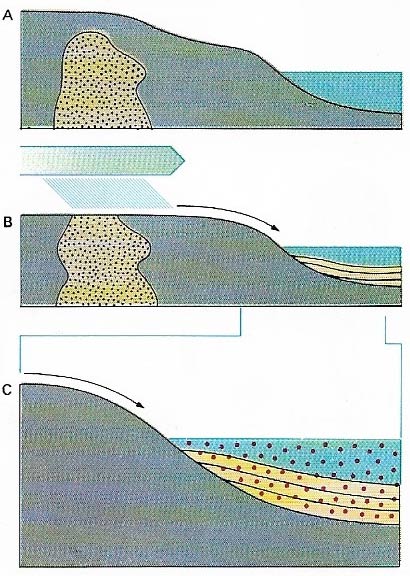 Fig 2. Sedimentary ore bodies are originally derived from metal-rich igneous rocks such as an iron-rich pluton (A), On exposure to weather the igneous body is eroded and iron is dissolved away in the form of bicarbonate (B). The solution of bicarbonate reaches a basin of deposition (a lake or the sea) where it becomes a hydrous oxide and is precipitated into the sediments (C). Iron oxide rolled about by currents before settling may form small rounded aggregates. During consolidation of the sediment the water is squeezed out of the hydrous oxide, giving hematite.

An ore is an aggregate of minerals and rocks from which it is commercially worthwhile to extract minerals (usually metals). An ore has three parts: the country rock in which the deposit is found; the gangue, the unwanted rocks and minerals of the deposit; and the desired mineral itself.

Ore deposits may be, for example, veins; infillings of breccia (consolidated talus); sedimentary formations, as of the evaporites; certain dikes; or, especially with the sulfides, hydrothermal replacement deposits (where hot or superheated water has dissolved existing rocks and deposited in their place minerals held in solution). Mining techniques depend greatly on the form and placement of the deposit.

Ores are formed in many different ways. The various ore of the same metal can have dissimilar origins.

Magma or molten rock is the origin of many mineral deposits (Fig 1). Some deposits are formed within the cooled and consolidated igneous mass itself. The minerals become concentrated by magmatic segregation. Examples of deposits formed by this process are the chromite deposits of South Africa, the famous iron ore deposits of Kiruna, Sweden, and the nickel sulfide of Sudbury, Ontario. Deposits formed as the same time as the surrounding rock are called synergenetic. When a mineral deposit is formed later than the surrounding rock it is known as epigenetic.

During cooling of the magma, hot gases and liquids may be forced,under great pressure, into surrounding rocks. These mineral-rich solutions cool and are forced to deposit minerals as pressure is reduced. Sometimes they find their way into small cracks to give veins, or a collection of veins (sometimes called a load), containing both economically important minerals and worthless ones (gangue).Veins have no great thickness but may run for considerable distances and penetrate to great depths.

Deposits formed by gases are called pneumatolytic. The apatite (phosphate mineral) deposits of Norway were formed in this way as were some of the tin deposits once mined on Cornwall. Those that originate from hot aqueous solutions are known as hydrothermal deposits.

The heat of the igneous intrusions changes surrounding rock, particularly those in direct contact with it. Where permeation of these by hot gaseous and mineral-rich solutions replaces some of the original rock the deposit is called pyrometasomatic and is often a source of copper, zinc, and lead. Such interactions are most evident at points of contact between granite and limestone.

Mineral-rich solutions sometimes replace only certain elements in the original rock; at other times the whole mass may be affected, forming large deposits such as the pyrite deposit of Rio Tinto in Spain and those of the Copper Belt of Zambia. The type of mineral deposit is determined by the temperature of the solution and associated gases. Specific minerals are associated with hotter and cooler areas. Tin, copper, lead, zinc, and iron sands are piped ashore off the coast of southwest Africa, gravels containing diamonds have been mined since 1962.