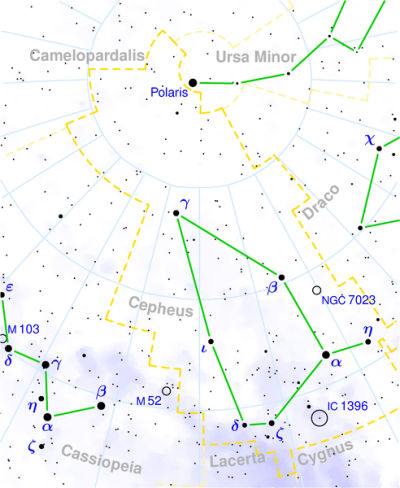 Cepheus (abbreviation: Cep), the King, father of Andromeda, is a northern constellation, mostly circumpolar from as far south as latitude 30° N, with a noticeable quadrilateral shape made from Alpha, Beta, Iota, and Zeta.

Cepheus contains several variable stars that are prototypes of their classes, the most important of which is Delta Cephei. VV Cep is a huge eclipsing binary of the Zeta Aurigae type, consisting of a red supergiant and a smaller blue companion in a 20.3-year orbit (magnitude range 4.7 to 5.4; RA 21h 56.7m, Dec +63° 38').

Gyulbudaghian's Nebula (HH215) is a Herbig-Haro object – a variable bipolar nebula generated by shock waves from a contracting protostar – in Cepheus. At the apex of its faint, fan-like shape lies the variable star PV Cephei, which provides the energy that illuminates the nebula. HH 215 resembles the classic variable bipolar nebula NGC 2261 ( Hubble's Variable Nebula) as it varies in shape and brightness and its spectrum is in a state of continual change.